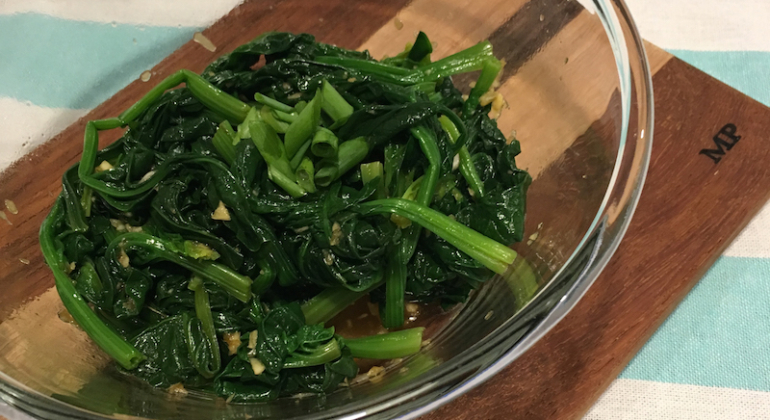 In my household, there’s always some sort of green veggie served every night, but at times I can’t be bothered to stir-fry them (which is my default mode in cooking vegetables). When I have spinach at home, I almost always make this recipe.
It’s actually a Korean dish, and the original recipe calls for toasted sesame seed. I almost never use it because it’s never in my pantry. Some variations also call for spring onion for garnish, which I sometimes use when I have them at home. Most of the time, though, the spinach will be served as is. 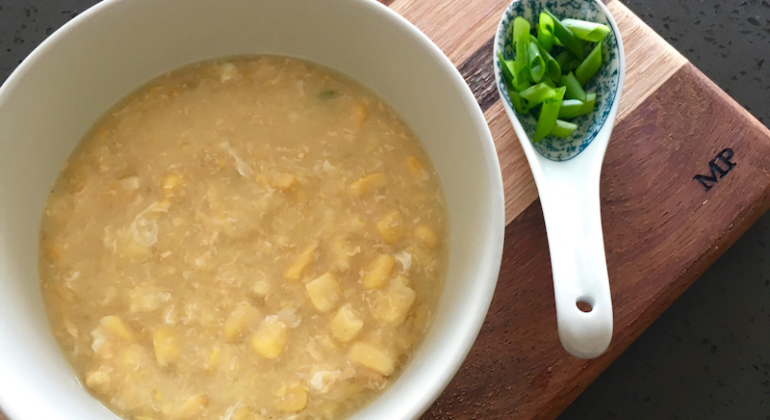 For the past year or so, I’ve been obsessed with homecooking. If you follow me on Instagram (@mpurnama), you’ll see that I cook almost daily. Many of you have asked for a recipe, and I’ve been wanting to collate all my cookings in one place (perhaps for my children later on). I know, I’m no chef, and still very much a newbie—I just love cooking at home, serving delicious, nutritious, easy food for myself and the husband.

So from those daily sharing of homecooked food, I’ve decided to create a new section on this blog for the recipes that I’ve cooked and become staples at my home. They’re mostly easy, mostly stir-fries, and mostly Asian. (That’s just our palate!)

I really hope that this blog will inspire you to ditch those takeaways and cook more at home. Not only you will save more money, you’ll be healthier too!

For my first ever recipe, I think it’s apt to share on how I make my corn soup. Saying that this is a staple at my home is an understatement—this is the first ever food that I’ve cooked, dating back when I was still a teenager. (Okay, probably second to instant noodles.) I’ve probably cooked this once every few weeks or so. Whenever I’m lazy, in need of easy cooking, or just wanting to add another non-heavy dish, corn soup is my go-to choice. 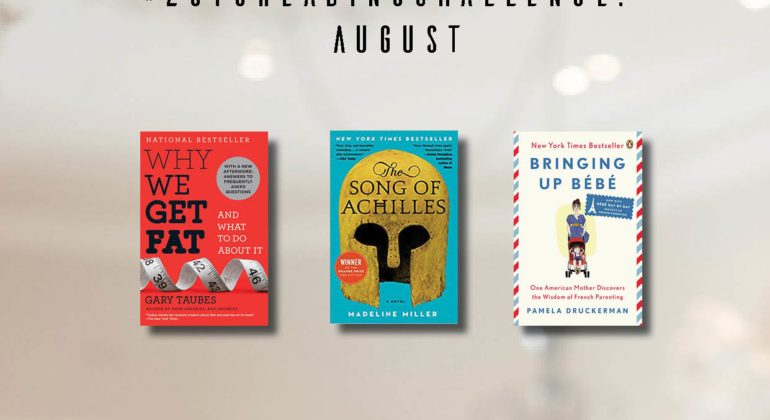 Spring is finally here. But oh it’s still so cold!

That aside, August is the month where I have officially finished my reading challenge. I have now read 50 books out of 48, and I really feel like I’m cruising through the challenge this time. I will keep on reading until the end of the year—there are still so many to read on my to-read-list!

This month, I read three books: Why We Get Fat, a nonfiction book on the ‘science’ of, well, why we get fat; The Song of Achilles, by Madeline Miller (remember that I read Circe last month? TSoA is her first book); and Bringing up Bébé, a nonfiction/memoir book of French parenting.

…And no, it’s not what you’re thinking. Definitely not. 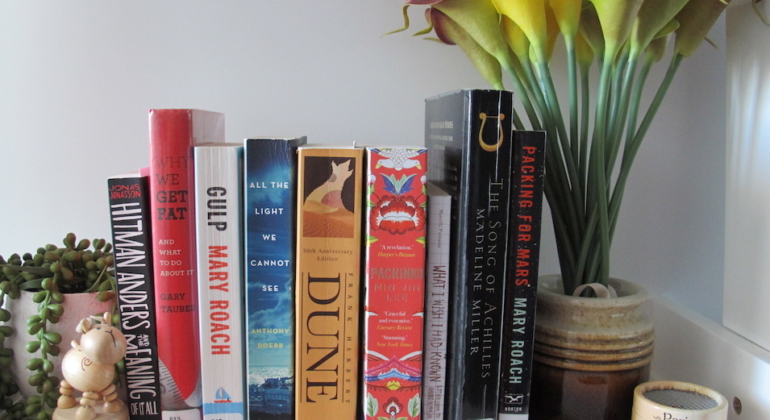 Some months ago, I came across this article from The Atlantic titled, The Quantified Welp: A new study suggests that measuring an activity makes it less enjoyable. It’s sort of self-explanatory, and it does make sense: if you’re doing something and measuring it instead of being immersed in the activity, you’d end up enjoying it less.

Of course, the study clearly says that the intention of the activity matters too.

The article goes on to paint another picture: say you’re doing colouring. You enjoy colouring. But then add a certain goal (e.g. colouring a certain number of figures), and you’d end up saying you enjoy the experience less. Sure, you get more figures done. But you don’t enjoy it as much.

A follow-up article on The Atlantic sums it simply: measuring an activity makes it feel like work, so you enjoy it less, even though you’re doing more of it. Consequently, it reduces your ‘subjective well-being’.

It makes a lot of sense, doesn’t it? 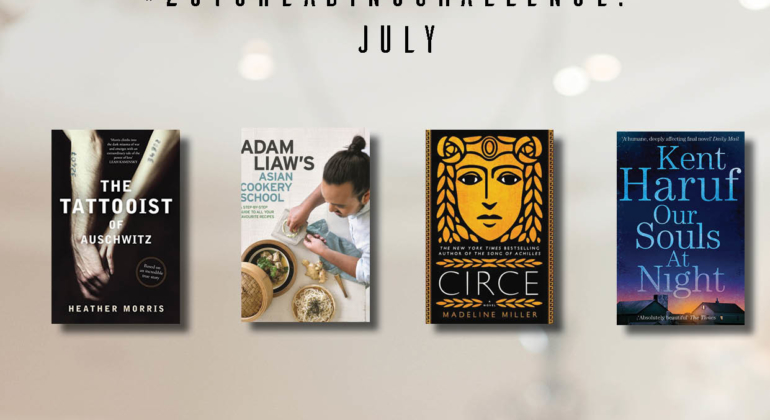 I can’t believe it’s already August. Only five months to go till the new year.

I know, I feel like I haven’t updating the blog much (or at all?) apart from these books that I’m reading. I’m currently at that phase in life where writing takes a backseat, choosing to do other things that I love as well instead (cooking, baking, and lots of reading). That being said, I think taking a break from writing does do me good. Hopefully I’ll come back into the groove soon(ish).

In July, I’ve read four more books. That means: I’ve read 47 out of 48 books! I actually can’t believe that I’m cruising through this reading challenge, and I haven’t lost the will to read yet. There are still plenty books on my to-read list, to-borrow list, or just sitting there idly on my bookshelf. 2018 is the year where I read indeed.

Here’s an overview of the books I read: one historical fiction, one Greek mythology, one fiction, and one cooking book. All four are good books, but Circe by Madeline Miller is definitely the highlight. It’s so good that I feel like I’m still living in the story, despite having moved on to reading two other books. If you love Greek stories, this one is a must-read. 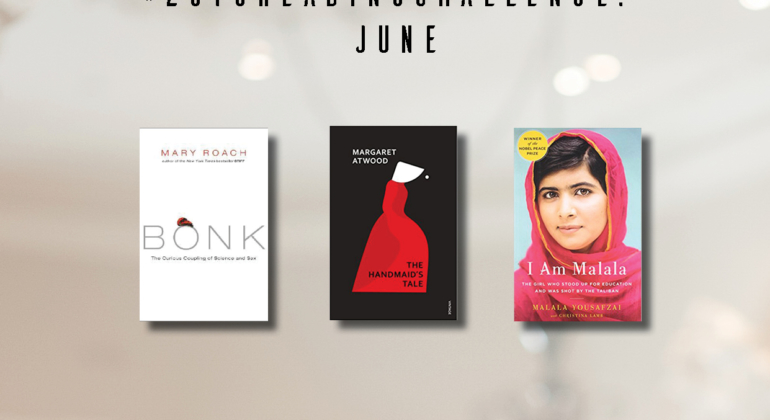 Despite only reading three books last month, I have officially finished 90% of my 2018 Goodreads Reading Challenge.

The total count is 43 out of 48 books. I’m cooling down, but I definitely enjoy doing all these readings.

The three books are all great, and I especially love The Handmaid’s Tale. I know, it’s a classic, and a book that I should have read way back when. I’ve gained a new reading friend (it’s so hard to find friends who do read, you know?), and she recommended this book endlessly. She even let me borrow her book! Needless to say, it’s highly recommended.

I also like Bonk. It’s a scientific book about about sex, and honestly it’s hilarous. I’ve read her book on human cadaver, and I have definitely put her as one of my favourite authors. Recommended as well!

The other book, I am Malala, is highly recommended by a lot of people. Malala’s story is one that we’ve heard a lot in the news these past few years. This may come across as an unpopular opinion, but I really can’t relate with her writing at all. The story is mindblowing, but it all falls flat on her writing. Not sure I’ll recommend this one. 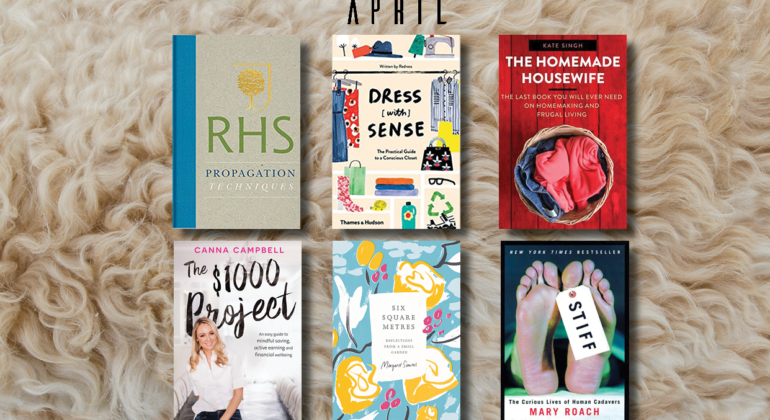 This month, all the books I read are nonfiction: a few about plants, others about homemaking, one about human cadavers—which easily is the book of the month. Granted, it’s not a book for everyone, but the author (a science journalist) is just so, so good. Two thumbs up.

So without further ado, here they are! 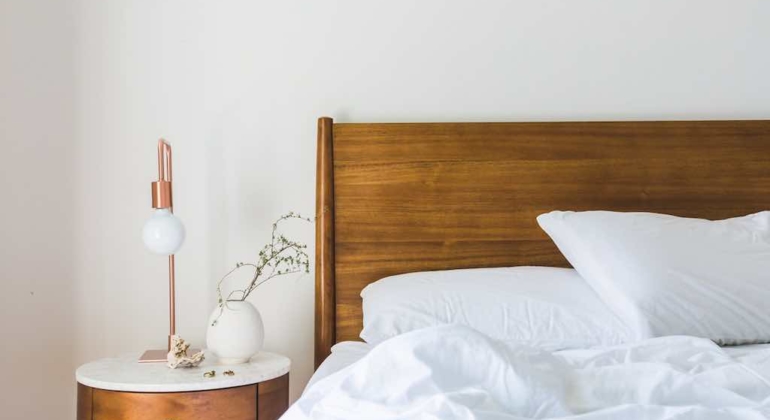 Merely eight months ago, the only few times I slept with another human being in my bed were either with my sister or my mother during a trip overseas. And another a few handful times when I went on a trip with friends (which could be counted by one hand). Point is: I love sleeping alone. And I couldn’t possibly imagine how I would get used to a permanent human being sleeping by my side, night in, night out.

(I don’t count the times when my toddler-nephew slept with me, because sleeping with him feels a lot different. For one, you don’t really care of moving around when you’re sleeping because once he falls asleep, he will stay asleep no matter what. Getting him to sleep is the hardest part.) 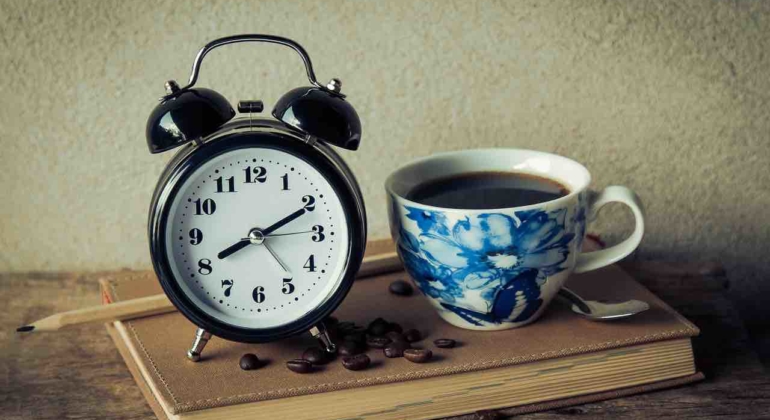 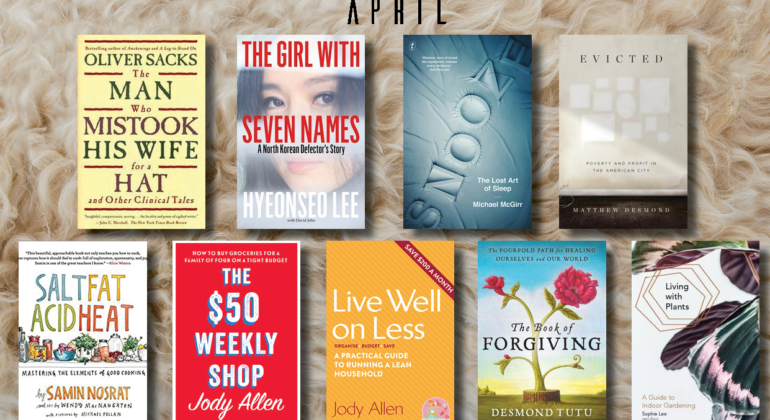 I started the month strong, but read considerably less nearing the end of the month.

Instead, I borrowed heaps of books on gardening (bonsai, indoor plants, propagating, herbs etc) and flipped through the pages. Heh. Yet I still finished nine books in total!

(Btw, you can access the books I read in January, February and March.)

After reading several heavy fictions, I’m in the mood for nonfiction. In fact, I read exclusively nonfiction this month, half of them heavy and half of them very light reading. From the pile, I really, really recommend Evicted by Matthew Desmond (about poverty in the US), The Girl with Seven Names by Hyeonseo Lee (about a North Korean defector), and Salt, Fat, Acid, Heat by Samin Nosrat (about the science of cooking). They are all wonderful!

So without further ado, here they are!