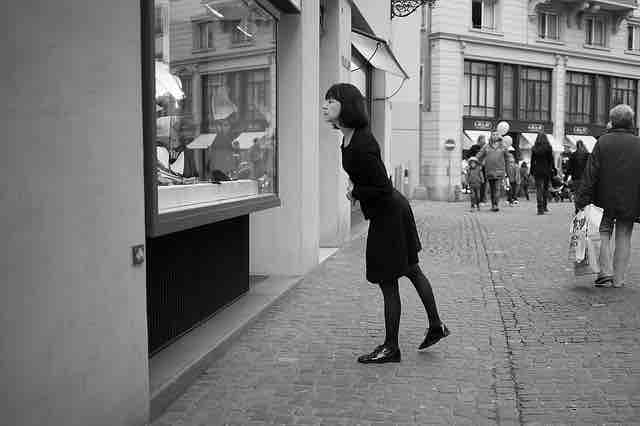 Last month, I found myself going to Seven Seeds cafe for the second time that week.

My first visit was to buy coffee beans. And during that time, my eyes saw something else that I couldn’t quite get out of my head for the next day.

It was a barista apron.

I had just bought my first ever manual coffee machine using my own sweat. So when I laid my eyes on that expensive denim-bib-with-tan-coloured-faux-leather-straps-apron, I knew I was in love. I wanted one. I had to get one.

So the next day, I grabbed one of the aprons and proceeded to the cashier. The waitress made small talk. ‘This is a cool apron, who is it for?’

Instinctively, without even skipping a beat, I said, ‘It’s for my boyfriend.’

‘So lovely!’ she smiled, tapping on the touch-screen computer without looking at me.

‘Yeah, it is,’ I said. ‘He just bought a coffee machine, so I thought it would be a nice gift.’

The lady smiled and went on about how lovely the gift/apron was. I handed over my credit card and walked back to my car, thinking, what was that?

Yet to be honest, I do it all the time.

I coax my stories, alter the specifics, and blatantly lie about stuffs to impress, or at least to try to be on the same page as the other person I’m speaking to. I have forgotten countless conversation I’ve made on ‘how I like this colour’ or ‘that sweater is lovely’ or ‘this cake is the bomb’ or ‘that book is just the best’.

The scientific reasoning behind this is that we don’t want to be the odd one out. Yes, Steve Jobs said that we should embrace being squares in the world of circles, but actually, deep down, you don’t want to be a square. If all five girls in your group love chocolate, you would be less likely to voice out your deep hatred towards chocolate, saying ‘I am okay with chocolate’ instead, which, actually, is not true.

If your boss and your colleagues think that something is a good idea, you would be more likely to go with the flow and let your criticisms pass. You would want to be seen as enthusiastic as the others and be ‘on board’ the project as much as possible.

A couple of weeks ago I went to Jakarta for holiday, and a distant family relative called to talk to my mother. I said that Mom was away, and we began small talk. For some reasons, she thought that I was my first sister (who’s married and has a baby boy), and began to ask me questions about ‘my baby’ and ‘my husband’.

I could’ve corrected her, but that might mean embarrassing her slightly on the phone, so I just went along with it (answering questions about ‘my husband’ and ‘my baby’ in the most neutral way possible). In hindsight, probably the reason I did that was I wanted to come off as a nice lady instead of correcting-mistakes-that-make-you-feel-bad-and-embarrassed-lady.

Probably those little things don’t mean anything. Probably they don’t hurt anyone. But everything big starts from something small, and I wouldn’t want to live my life impressing the people that don’t matter.

The next time I find myself wanting to impress those who don’t matter, I hope I’ll be able to drop the act and just be myself instead.