There are couples who become Facebook official and there are others who don’t even know how to change their statuses. Me? I’m having the first world problem. 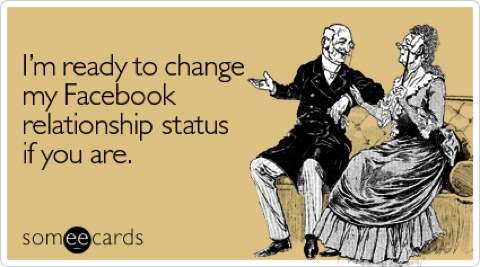 When I was a teenager, I have always been sure that I will change my Facebook relationship status one day.

Like, I was 15 and partnerless because my parents forbade me from getting in a relationship till I’m older, but that didn’t mean I was not witnessing my peers showing off theirs.

Statuses change, then congratulations storm in. Comments like, “Ahh, I’m so happy for you two!” or “May you have a long-lasting relationship!” fill their walls. Then we count the number of likes. You know, the more likes you have, the more social and popular you are.

But I still have that ego though. One day, I’ll show the world the best man in my life. One day.

Years went by, and I began to see problems arising on those changed Facebook statuses. Like, you can see which couple is fighting at the moment because one of the two suddenly ‘hides’ his relationship status. And when one gets angry she deletes the ‘you and me’ album containing all pre-wedding-look-alike-pictures of the two of them. I’d never want to be one of those people.

But I still want to know what it feels like to have a changed relationship status.

And perhaps, if I’m being honest with myself, the more underlying reason is this: it would be great to show your ex-potential-partners-who-have-dumped-you-for-whatever-reason that you don’t deserve me, I have moved on, I have moved on first, now I’m dating someone who is on a different level than you, I’m insanely in love, and I’m happy beyond words.

I was 19 when I found myself a reporter at an online magazine. Then I pitched in to write an article about the importance of being Facebook official. I went out there and asked couples about why (or why not) they change their statuses.

Anyways, you can read the full story here.

Fast forward a few years and now I’ve been happily together with someone special for quite some time (well, counting the unofficial and official time, it’s two years, one month, and twenty seven days to be exact). My boyfriend has always been the number two. He’s really not a show-off type of guy. In fact, he hates attention. In group dinner, he hates to be the one sitting in the middle of the table. Me? Well, as you probably have guessed, I’m a bit of the opposite of him.

Thing is, he never actually cares about being in a relationship on Facebook. However, even when he doesn’t see it as important, if I still want a changed status, he will happily do it.

It’s really funny. What? The talk of a couple discussing about should-we-change-our-statuses-now-since-we-are-official-anyway kind of thing.

Like, you know, I have never even changed my profile picture in any social media to a romantic photo of us together.

But anyway, we end up not changing our statuses (yet…?). I still can’t find a good enough reason to change it (except from feeding my pride, ego, and attention-seeking quota for the day). And I know he still loves me with or without a status.

I’m now 21, and I no longer want an album titled ‘you and me’ and fill it with narcissistic lovey-dovey pictures of us. I no longer care that much about telling the Facebook world that I have a boyfriend. I don’t want to enter the showing off competition either.

If we do change our Facebook statuses one day (even if it’s tomorrow), I want to do it for the right reason. Somehow, I still can’t find the right reason to do so. Considering my boyfriend doesn’t really give a second glance about the thought of changing our statuses, well, we have decided to just be Facebook unofficial but reality official.

Ps. If you do know the right reason to why I should change my Facebook status, please, share.