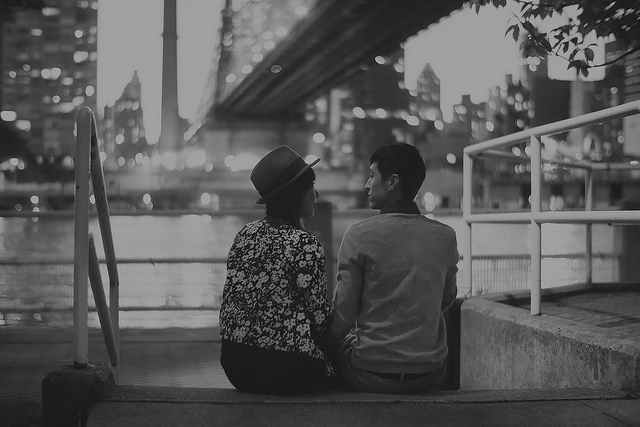 I remember the first time I saw you. I didn’t remember what you were wearing, or what I was wearing. But I do remember the restaurant, the place, the seats where we sat. My sister was asked to have dinner with her then-crush-now-boyfriend and his friends. I had just finished uni for the day and it was about six in the evening. No girl in her right mind would have dinner by herself after a long day of studying, so I said yes to my sister’s invitation.

Or perhaps I was self-inviting myself. Anyway, I also wanted to see the guy who had stolen bits and pieces of my sister’s heart.

We had dinner at this Thai restaurant. I sat in the corner of the table, beside the wall, and you were late. You were the last one to arrive, right after our food had arrived. You apologised for being late, and sat at the other corner. We had four people between us but somehow, we saw each other.

I was introduced as the sister of the girl that everyone in the group wanted to see, and you were introduced as the housemate and old pal of my sister’s then-crush-now-boyfriend. I knew right then and there that I had fallen in love with your smile.

Then I found out that you were 11 years older than me.

But it didn’t matter. You wouldn’t set your sight at a little girl like me anyway.

After that dinner, we had other countless group dinners. I began to fancy you – your smile, your quiet nature, your kindness. You were always the last one to leave the table, the last one to walk out of the restaurant. You were the big umbrella guy, and when it did rain, you triumphantly opened the heavy, long-held umbrella and shielded me from the pouring water. You were the door-opener, the protector.

I fancied you, and I had always told my sister, jokingly, that you were mine. Of course, I was only half-joking.

You were my sister’s then-crush-now-boyfriend’s good friend, but it didn’t matter. For you were never to set your eyes on me, a girl not even twenty who talked about assignments when you talked about politics.

I still remember the day when you first asked me out. You were an accomplice, wanting to set my sister up. So you picked me up, while your good friend picked her.

You invited me to have coffee before a mutual friend’s birthday dinner. I said yes without thinking, and after that, hit the panic button.

I know, I babbled. I babbled a lot. I know you could tell that I was nervous. I know you were laughing at my actions behind my back. Probably. But it didn’t matter. I had a date with you, and we clicked.

We clicked so much that you ended up asking for a second date. And a third one.

We clicked that you suddenly grabbed my hand during our first movie.

We clicked so well that you told me you have set your eyes on me since we first met at that Thai restaurant, but never did make a move because you hit the eleven-year-age-gap wall.

But I’m glad you punched those walls and asked me out despite the odds. For during those innocent two-second glances back at the restaurant, I know right then and there that I have fallen in love with your smile.