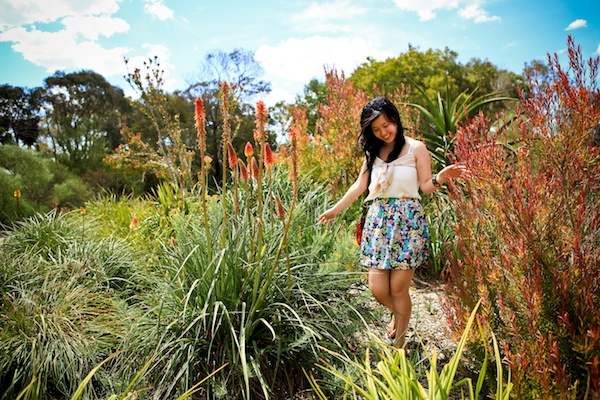 She scoured through her wallet and gave him the small black-and-white card.

“Hold on to your ticket for the return journey,” he said.

“Thank you,” the girl replied, entering the bus while putting the ticket back to her red slingbag.

She took one step, and another, searching for empty seats. At 9.45 a.m., she discovered that it was not an easy feat.

People are indeed on holiday, she thought. But it was still early December, where do all these guys come from?

She walked all the way to the back, and chose an empty seat nearby the window. Checking once again that she got her tickets, she took a deep breath.

It was 9.47. She would get there in 20 minutes. There would be no rushing. The bus would be on its way any minute. Besides, worrying wouldn’t do her any good, wouldn’t it?

She was on her way, but she was restless.

Nervous. Her hands sweating, her heart pounding. She checked the time, 10.01. Don’t worry, she said to herself, you’ll get there on time.

She felt like it was the longest bus ride she had ever been in.

The girl began to look at her phone, and stared at the background photo. She was smiling happily while resting her head on a guy’s shoulder, and the guy was kissing her head while wrapping his right arm around her.

Announcement was made saying that they were close to the destination, and the girl tightened her grip on her bag. She thought of where to go for lunch, and suddenly, bit her lips.

The girl released a silent laugh, and looked outside the window.

She got off the bus, entered the glass door, and looked for the arrival site. She stood there, in front of the gate with hundreds other, waiting. It was 10.25.

She played with her hair, checked the time, and looked left and right in every ten seconds. She thought of buying coffee, but afraid that she would not make it.

Fifteen minutes later, she was still doing the same.

Her thoughts were racing.

All those what if questions.

But what if, what if this time, it would be different?

What if something has changed?

Forty minutes had passed, and there was still no sign. She became restless, walking to the left and right, searching through the countless crowd who have found who were they looking for, and who, like her, were still waiting.

She began to panic, took out her phone, and sent a text saying that she was there. She hit the send button, and took a deep breath.

Everything’s going to be okay, she tried to calm herself.

She stared at the background photo on her phone one more time, looking for reassurance, and put it inside her bag.

Wandering aimlessly, she cast her glance to the left, and her heart skipped a beat.

Finally, the girl smiled, and ran towards him.

He hugged her tight for the first time in a long time, and kissed her head.

“I miss you, babe,” he whispered to her ears.

And in that one moment, the girl felt like she had never been happier in life.