I was standing there in my long purple evening gown, wearing heavy make up and a lot of hair do, watching a video about our memories in high school.

It was supposed to be an outstanding night –  a night to remember, some would say.

It was my Senior High Prom Night, and yet I stood there flabbergasted, looking back and forth at my teachers and the video projected in front of my eyes. I thought, this can’t be happening. Please, don’t ruin my Prom Night.

Let me rewind the story for a while. 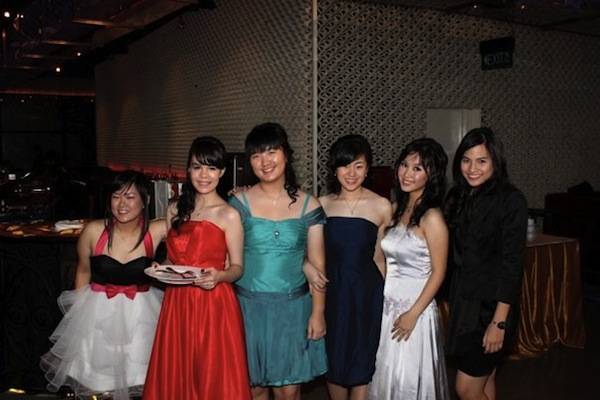 My friends and I (the second from the right) at our Senior High Prom Night.

My Prom Night was held at an unfriendly club. The context of our school was a Christian school where 70 per cent of the students never set a foot in a club before. Or at least, that was what I believed.

But that was okay. It was the night to remember. I had fun with my friends, or at least I was pretending to, and that was what mattered, right?

When the video of how we would reminisce our high school years was played, I squealed in horror.

Our dear teachers were there. And I love and honour my teachers. I felt… terrible.

As if it was not enough, there was an after party (read: drinking, clubbing, and smoking shisha) right after the Prom Night ended, which approximately a third of the students in my year went. And the rest of us realised days after that the money we paid for the Prom Night was inclusive of the after party. No wonder it was expensive. We had just subsidised drinking and smoking.

Looking back at my Prom Night, I felt disappointed. I don’t remember the heartwarming, we’ll-be-friends-forever scenes but instead I remember how short of expectation it was.

And I realised, not everything would go as we expect it to be.

Once I read that “Everything that can go wrong, will go wrong.” In a sense, it’s true. And letting go of the things that go wrong is sometimes the right thing to do.

Randy Pausch once told the story of his dented car in his book The Last Lecture. His wife, Jai, accidentally hit his car with another car. While his wife was so afraid that Randy would go mad, Randy let things slipped by, not even wanting to repair his dented car. “Not everything needs to be fixed,” he said.

And it’s true. The key is to find the things that matter most and repair it, and ignore the other insignificant things.

I may not have the perfect Prom Night, but I have something else: the long-lasting friendship I have forged with my close old high school friends.

I don’t have one masterpiece night where everything fits perfectly, but I have sweet memories about my friends and I throughout high school.

Have you ever experienced something bad that you want to fix? Share your thoughts in the comment section below.