We were at the Hard Rock Cafe, Bali.

The occasion was simple: it was our Junior High School farewell trip. I was the head of committee and after bloodshed has been spilled in making about 50-60 fifteen-year-olds to be physically present, queuing for buffet-style Western-ish food at one of the most well-known franchise in the world, we were finally there.

Before this trip, my friends and I have assigned two completely able guys to host the night’s activity. We would do games, dance to our heart desire (though no one did), and take lots of pictures.

The two boys took their places at the stage, and I could see how nervous they were. They held the microphones, but we could barely hear their voice. They were, clearly, not their usual selves.

A short while later, people started to lose interest and talked among themselves. A good friend of mine then suggested that I go fix the scene – translated as walking up the stage and save this supposedly pinnacle of our Junior High School farewell trip.

And I thought I saved the day (or at least, made it a little better). A couple of years later I found out that I have dented these two guys’ pride. For one, it showed that I didn’t trust them, and for two, I kinda wrecked that night for them.

Am I forgiven? I’m not too sure.

But surely if I know what I know now, I wouldn’t be walking to the stage that night. Life’s better lived to not be dealing with someone’s pride. 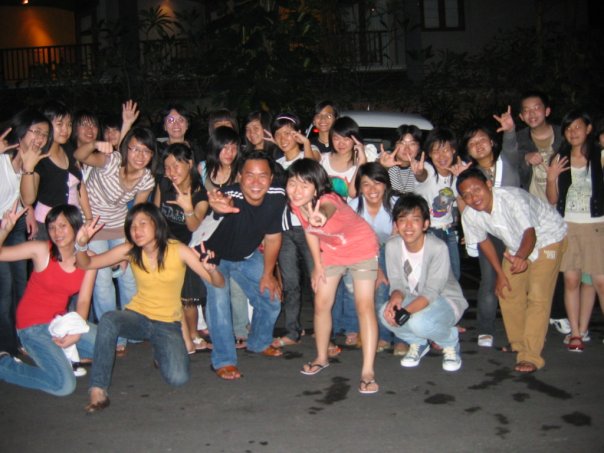 Moments after we stepped out Hard Rock Cafe, Bali. Do you see how glowing was I? (Note: I was the one slightly on the left, with black t-shirt.

That said, during those weird without-status-but-going-out-ish relationships sometime in high school, I have gotten my fair share of facing guy’s pride too. Guys want girls who are less than them. Guys want to be better than their girls. So naturally, when I had good grades, it crushed him.

I couldn’t share my excitement, nor my accomplishments in class. They would wreck him. I told him that I might be good at academics, but he is good at something else, but he wouldn’t believe me. I have stained his pride, in a sense, in a way that he lost his feelings for me overnight.

Any girl who has or had a partner with high pride knows this better than anyone else: we hate it. It made otherwise perfectly kind and gentle men to be jerks who don’t want to admit that they are wrong. It makes men want to win at every game. It makes guys lose his cool when problems come. It makes them selfish.

Some guys connect his pride with self-esteem. A totally dangerous game to play as he will often feel insecure of the mistakes he make.

I believe the first murder on earth happens because of a stained pride. As the oldest, Cain felt humiliated and unappreciated. He felt God played favouritism. He lost his common sense, and killed his own brother.

That’s what pride can do to you, my friend. It can destroy your life.

I know friends who don’t want to admit that they are wrong, and instead keep on debating that they are right, finding legitimate excuses to save their faces.

But I also know friends who are humble – who take responsibility and listen to others’ opinions, even if that means admitting their ideas are less superior.

Guess which type will girls choose?

Here’s some words of advice for girls: find someone who lays down his pride for you instead of defending it. It’s one of the truest marks of a gentleman.