If anyone ever tells you that the courting period is the best thing in a relationship, I would call him a big, fat liar. Why? For me, it is the second worst thing after breaking-up. 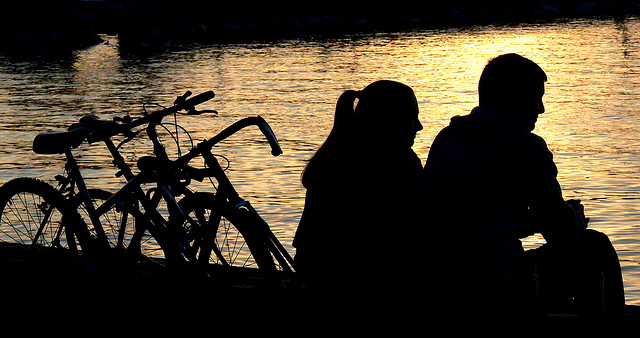 The courting period basically sounds like this: you spot someone, you spend time with her, you get to know her, you like her, you chase her, and if the feeling’s reciprocal, boom! You guys become a couple. Those are the general steps that everyone believes in.

However, the reality usually looks like this: you spot someone, you wrestle with your mind for a month to whether say hello to her or not, you try to make awkward comments on certain things and talk to her, you ask her her phone number to her best friend but never text her until three months later, you text her constantly, you read every signal wrongly and make the wrong choices, you ask yourself day and night if whether she likes you, you analyse each and every of her doing, you interrogates her friends of whether she likes you, and six months later you muster up every courage that you have to ask her out.

Oh how hate the courting game.

I hate the waiting. I hate asking myself every ten minutes of whether he texts me because he likes me or he’s just bored, or being nice. I hate dissecting every word that he says, every movement, every text message if whether there’s a hidden meaning behind it.

I hate the time when he suddenly stops texting me, because sometimes it happens, whether to test me to look for him as well or to kill me softly, and I hate when I’m being tested.

I hate the insecurities that I’m feeling, and I hate the guessing.

Of course, I have had my fair share of experiences. Once, a guy was texting me for two weeks straight and suddenly stopped. I sprained every muscle in my brain trying to think why he had deserted me. Had I done something wrong? Was he just testing me? Did he meet another girl? Did he become disappointed after knowing me because his expectation of me fell far too short?

Another time, a guy was putting me on the hook, playing the fishing game way too well, contacting me every now and then to give the signal that he still fancied me, but not too often that I would often question his motive.

Of course there were also times when I simply was not interested, and he didn’t take whatever signal that I gave him – from short sentences text messages to not replying for a long, long time, to not responding at all or trying to make 1001 excuses to run away from him.

I can’t really tell straight to his face that “Sorry, I’m not interested” because he didn’t actually say anything to me yet but I was dying because I have dropped hints everywhere.

Not to mention the problem on what to wear when going out with him, either in a group or just private. Revealing garments? He would think I’m too provocative. Protective clothes? He might think I’m a nun. Make-up or no make-up? Skirt or jeans? Gaah.

Gone are all the nice flowers and fetching to and from everywhere, getting bought every single thing that you want because he treats you like a queen. I don’t know about you, but I guess it only happens in movies.

And what’s the normal courting period before going into a relationship now? Three days? Two weeks? Six months? That’s months of being uncertain and living the emotional roller coaster – which is not thrilling but draining.

For example, when a friend tells you that he’s not interested, you would try to justify his behaviour and that “he texted me to say good night”, or something like that, and you insist that he has some feelings for you.

On the other hand, when a friend is 100 per cent sure that he likes you, you would say that it’s impossible, that I’m not good for him, that he couldn’t possibly like someone like me, that he hasn’t called, or something like that.

Does it ring a bell?