“You were meant to change the world – in some small or big way.”

I was reading Michael Hyatt’s post, When you realize you’re living in a bubble the other day. In there he wrote an inspiring story which served as a foreword to Jeff Goins‘ new book: Wrecked. Having been a fan of both authors for months now, I decided to buy the book immediately.

I finished it two hours after I bought it, and I love it. It reminded me of some values that I hold dearly in life.

The book is a bit philosophical, but yes, I love it. It teaches me to live out of my comfort zone once more, and challenges my perceptions on living well and living to leave a legacy. I hope I’m in the latter group.

But it’s not just another inspirational book. It’s brutal. It’s painful, uncomfortable, and often, it makes you feel bad on living a comfortable life. Sometimes, it makes you wonder about what kind of legacy are you leaving to the world. 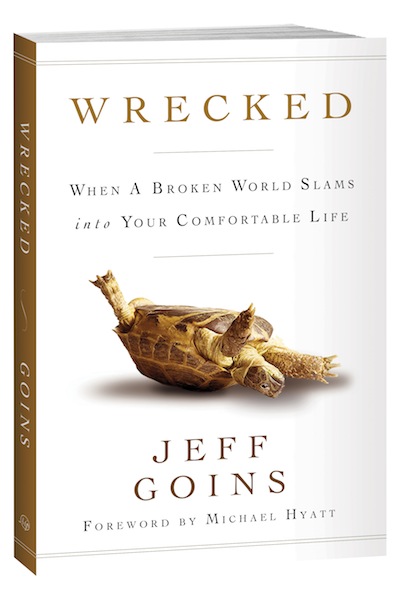 What’s Wrecked all about? Jeff Goins said in his book that it’s about being outside of our comfort zone. That there’s something bigger in life than just working your ass off to graduate, get a car, and get married. That the world’s broken. And you can make a difference.

In the book, he shares about his experiences doing countless mission trips and street ministries, on which he befriends people from the slums and tries to help them. Because once you have seen how broken the world is, you would never see your dinner plate the same way.

And I feel guilty.

Because I have lived a comfortable life my whole life.

I was born to a ‘comfortable’ family. I have never tasted poverty, and growing up, my parents have provided me with everything I need, and even more. I was somewhat a spoiled girl.

Not until I tasted how hard it was to earn money (which was during my first part-time job in the first year of uni, around two years ago) that I realised the real hardship of earning money. I was never a big spender, but that first taste of getting your first pay-check over your first sweat is quite emotional. And I would never look at money the same way again.

Then I met friends who literally need to work three different part-time jobs to be able to support themselves throughout uni. I began to appreciate my life even more.

Not long after there was a debate in my community about giving to the street beggars. One argued that giving to these people would prompt them to beg even more for money and to not find jobs. Another argued that if you do not give to them they might not have their hot meal for the day. And finally, my pastor said, “If you don’t want to change the system and provide jobs for the beggars, quit whining and just give.” And I did.

I tried to give some spare gold coins for the poor. I tried not to just pass them by and actually give them a second look. Sadly, most often, I was too busy living my comfortable life. I was not even committed. I cared for myself, my welfare, and my needs more than anything.

“Our culture is terrible about encouraging commitment. Everything around us is about ease and convenience. If you wait too long in line, give up. If your spouse upsets you, divorce her. Life is about you, after all, and what you want. Commit to the things that matter to you and when you stop caring, move on – that’s our mentality.

The problem is that’s not commitment. It’s not much of a life, either.”

And being wrecked reminded me a lot of things that I take for granted. Parents who have been married for 28 years. A prestigious education overseas. A lovely family. Supportive friends. Health. Protection. Life.

And once you’ve been wrecked, you would never see life the same way again. 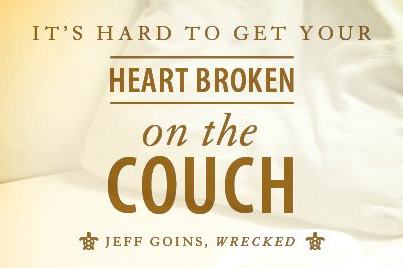 Author’s note: Jeff Goins is on a mission to dethrone the queen who wrote 50 Shades of Grey on Amazon top list. In his own words:

“But we never beat Fifty Shades of Grey. And something about that just feels wrong. So I want a redo. A mulligan, if you will.

So this week only, he’s selling his book (Kindle version) for $0.99 on Amazon, which is 93 per cent discount. There is no better deal.