I have never known her that well, only occasional encounters here and there. We have mutual subjects, yes, but I never communicate deep enough with her to actually know her.

But today, I stumbled at her blog. She does blog, and for some reasons, I read through her posts.

In a blink of an eye, I am amazed and humbled. I know about her struggles, her thoughts, and her feelings. I know her takes on life. It seemed like I know her well, even though actually, I don’t.

And I begin to respect her. 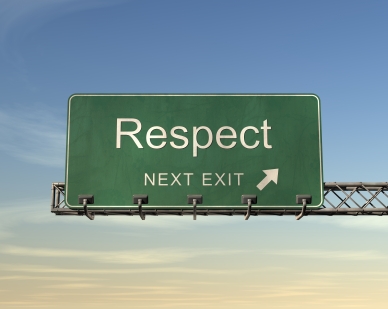 To some extent, this is true. I tend to respect people who have come to respect me, and if they don’t even try to earn my respect, or show some interest in me, why should I bother? It might be a cultural thing, but every time I respect someone, it’s because they have done something worth respecting.

Imagine that your boss at work is the most strictest person on earth. He, however, has been in the field for fifteen years and knows exactly what he’s doing. Imagine then having a boss who has no experience whatsoever, and got the position just because he’s the CEO’s son. Who would you respect more?

We tend to respect those who have proven themselves and worked their ass off to get it, compared to those who just take it for granted.

Today, however, I learn a different lesson about respect.

Respect is earned, yes, but it is earned by talking the same language.

Before I read my friend’s blog, she is already my friend. But I didn’t have that kind of respect for her. After I read her blog, some things click, and I begin to see her in a different light. I begin to respect her. Why? Because I’m a blogger, and I’m a writer. I talk in the same language as her. We talk through writing.

Some other times, I find myself struggling to respect an authority figure. Why? Simple, because that person doesn’t talk the same language. He lives in a totally different world than mine, and I’m struggling to connect with him. While I’m an artsy, right-brain person, he’s a hardcore, left-brain one. He doesn’t know a single thing about the world I live in, and neither I him. We see things too differently, having opinions and thoughts at the opposite ends.

And yes, I’m still struggling to respect him.

Yet what happens when I meet people who live in my area? Creative people? Artists? Journalists? Writers? It just needs a click, and I will respect them straightaway. Because I know what they are going through. I’ve been there. I’m there. I’ll be there. I know their language, context, and world. I live there.

That’s why birds of a feather flock together. Because they can appreciate each others’ work. Because we love to be appreciated. To be welcomed. To belong. To fit in.

And sometimes, the ones who will respect and welcome you are the ones who think like you – who appreciate things the same way you do.

And maybe that’s why I feel respected and welcomed at one place, and not the other.