Out of my respect for the great action and impeccable effects, I gave it a 6.5. But actually, I was disappointed from the first ten minutes. (Warning: this review contains spoilers). 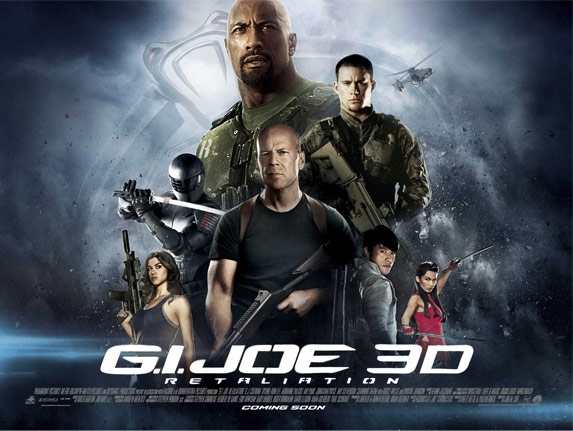 First of all, I am NOT too impressed that the director chose to kill Captain Duke (it IS Channing Tatum, after all) during the first ten minutes of the movie. I told you there will be spoilers.

And of course, I don’t believe he’s gone for good. I choose to believe that in two years’ time there will be G.I. Joe: Cobra’s Last Battle or something like that, and somehow Captain Duke (who was only half-dead when he was deserted at that desert for he was believed to be fully dead) would have been captured by his crazy girlfriend’s brother a.k.a the Cobra commander and injected with nanomites that made him evil. And somehow in the end of that third movie Cobra will die and he will live happily ever after with the girl (who was nowhere to be found in this sequel). Amen.

Okay, I am mad. But seriously? I have no infatuation whatsoever to Channing Tatum (I agree he is good-looking, but he’s nowhere near the level of my crazy fan-girl-state-like with Ryan Gosling, for starter), but for the rest 100 minutes of the movie I was actually waiting for Captain Duke to make a comeback. So there I was at the end, seeing Dwayne Johnson and Bruce Willis and other legends. And still no sign of Captain Duke.

BUT ANYWAY, despite my rambling about how-the-director-is-making-a-mistake-by-killing-Captain-Duke-in-the-first-ten-minute-of-the-movie, it’s actually quite a decent movie. Action’s great, effect’s wonderful, cast’s impeccable.

It’s an entertaining movie, but if you’re looking for a good plot, well, it’s your usual predictable action movie with heroes and villains.