When I was in Primary School, I spent my evenings on the street.

I rode my maroon bicycle with my other three neighbours, put on my roller-blades and bruised my knees, and visited the sport center and tried to make myself taller, a.k.a went swimming.

I filled my days conquering bosses on the fat, small screen (this was before flat-plasma-LCD-LED-TV-screens were invented), devouring RPG walkthroughs on the net, and exhausting my brain on finishing the missions.

I bought comic books that now filled eight big drawers. I watched movies, countless of them. I still can tell you the exact lines that a cast member says on a particular movie, just because I have watched it too much.

And guess what? None of childhood time was spent on reading actual books.

Yeap, that’s my secret. I never did like to read. 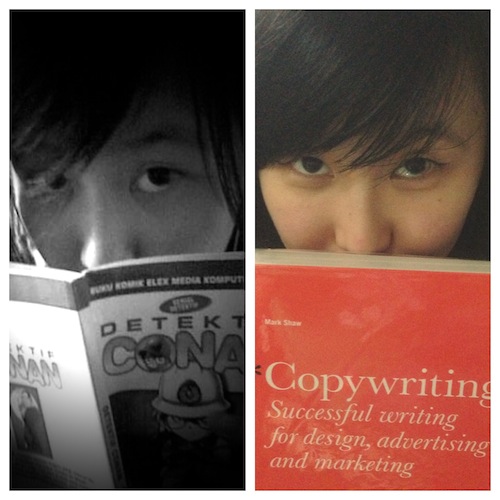 From a comic-reader to a (real) book-reader. Feels like I have converted to a whole new religion.

One afternoon I was reading Susan Cain’s Quiet and suddenly my Dad said, “Mom, look at our youngest daughter. She really likes to read books.”

But I never was a reader. I didn’t like to read when I was a child. Where does my fondness for reading come from?

Actually, I think it comes from my second sister.

My second sister was a genius, and enrolling in the same school as her meant that my existence must bore some resemblance to uphold the family honour. So I started forcing myself to read every book that she read. That meant devouring All Quiet on The Western Front, Five People You Meet in Heaven, Tuesdays with Morrie, and their derivatives by the time I was in grade 8.

Of course, I didn’t understand the books back then. I read them for the sake of reading them, you know?

On book review assignments, I cheated. I chose books that have been made into big block-buster movies. I made reviews on two of The Lord of The Rings novels back in grade 7 (just because the third sequel hadn’t been made into a movie). Now I’m 20 and I haven’t even finished the trilogy. I wonder why my English teacher gave me As to all those reviews. Didn’t she know that a 13-year-old whose first language is not English couldn’t possibly be reading such difficult books, let alone make reviews of them?

It wasn’t until I read the Harry Potter series that I began to read books for the sake of my sanity.

Harry Potter. Then I read the Inheritance Cycle. And then I re-read Mitch Albom’s books. And, and then I fell in love forever.

When I went to university and started a new life in Melbourne (and being reunited with my second sister), I started commandeering her books. To her credit, she always has a great taste in choosing them. So I began to read more. Then I began to read widely.

People always say that the thing you love doing when you was still a kid is the passion that you have unconsciously known. When you are trying to figure what you genuinely, instinctively love, reflect on what you like doing as a child, for it portrays your innocent, uncorrupted decision to do what you love.

But I never did like to read as a child. I never did write stories, let my imagination wander, or think about unicorns and dragons in a faraway land. Does that mean I’m a fraud reader and writer?

I have never felt that way. And that’s okay.

That’s why I start reading books, getting hooked, and reading more in return. That’s why I practice my writing.

If you wonder what you’re good at now, look at what you love doing as a child, for it’s a good start. But when you doubt yourself on what your passion really is, I still think the most important thing is the choice you make right now.