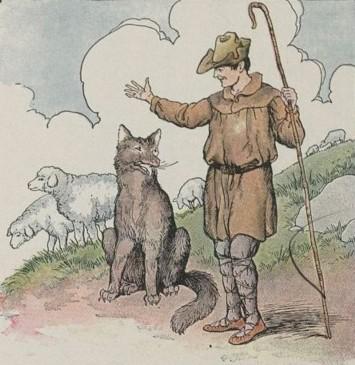 A young shepherd was out in the fields, looking after his hundred sheep.
He played with himself, alone with the greens, when boredom struck and stayed still.
He thought hard and hard to pass the time, and an idea came to his blank mind.
He ran to the village, looking scared and afraid, shouting, “Wolf! Wolf”, pointing to his sheep.
The villagers panicked, grabbed anything they could, and stormed to the fields, where everything was peaceful.
While chaos reigned, the shepherd laughed and laughed until his stomach hurt.
“Where are the wolves?” one irritated villager said.
“There was none,” the shepherd said between his breath.
Skulking and cursing, the villagers came back. They ought to forgive the stupidity, after all, he was just a boy.

The next day, the shepherd was visited by the same boredom. He thought of the villagers’ funny faces, and decided to see them once again.
So he cried, “Wolves! Wolves!” even more dramatic this time.
The villagers ran, but still peace and quiet they found.
“Where are the wolves?” they demanded, knowing the answer written on the shepherd’s laugh.
“There was none,” the shepherd said between his breath.
The villagers skulked and cursed and thought that was enough. They went back to the village and trusted no more.

Some days after, the shepherd fell asleep on the fields. He woke up jolted, for his sheep were restless.
He spotted the wolf, now aiming at his herd. He ran as fast as he could and screamed, “Wolves! Wolves!”
Yet the villagers did nothing – they paid no attention.
“It’s true, there are wolves in the fields!” the sheperd desperately shouted.
“No more lies,” said a villager. “We are not to be fooled a third time.”
Tired and exhausted, the shepherd went back to the fields, and saw none but despair and agony.

Author’s note: Who of you haven’t heard of this story before? This was our childhood, and today, the story was playing again and again in my head. I decided to write the story using my own words because hey, it’s still practice storytelling.

Why? I guess every now and then we need a reminder. About trust. It’s something that people may give to us freely – for them to trust us, to trust our words, our actions. And yet sometimes, we take it for granted. We abuse it.

When you truly lost a trust is when you regret of everything you did. Like the shepherd, sometimes we didn’t think of the consequence of our actions. Only after everything is said and done, we weep out of our own ignorance. Because when you finally tell the truth, no one will believe you.

Don’t be the shepherd. Don’t abuse the privilege you have.

Because trust is easily given, yet hardly regained.