The three of us were having lunch at a restaurant. Food’s been served, bellies’ been filled, tea’s been drunk. We sat there, chatting about life, about relationship.

And so, a friend in her 20s asked me a question.

“When you are getting into a relationship at this age, will you think that this person is going to be the person you marry?” she asked.

Another friend, a guy in his 20s, didn’t say a word, yet I could sense that he was a bit startled. He must not have heard the word marriage often.

“When you were in your teens, I think you can be in a relationship for fun,” I said. “At least, back then, we still have the freedom to have fun.

“Now, we would keep marriage in mind when we meet a potential partner. It’s not like we must get married with that person, but we would definitely need to consider it. How many years do we want to be in a relationship before we get married? Two, three years perhaps? And how old are we going to get married? 24? 25? Well, do the math.”

“Agreed,” my friend said. “That means I made the right decision.”

Well, she had just said no to someone.

“I guess, it’s no longer about trying, and breaking up in the end,” she said.  “Then there’s this process called moving on, and trying again. And feelings would get hurt. I’m afraid I’d hurt someone.”

A couple of days later, another friend, also in her 20s, posted in her blog about one of the most important questions in a relationship: which one is easier, dealing with regret, or dealing with moving on?

She thought, it’s easier to deal with moving on.

“And for me, it’s easier to move on rather than dealing with regret every time I see him,” she wrote. “It’s easier for me to be sad for a moment and think, ‘But I have done my best, following my heart and trying to make it work. It just didn’t. It’s better for me to move on.’

“I’d rather do that, rather than haunted with the words: what if. What if I tried. What if…” 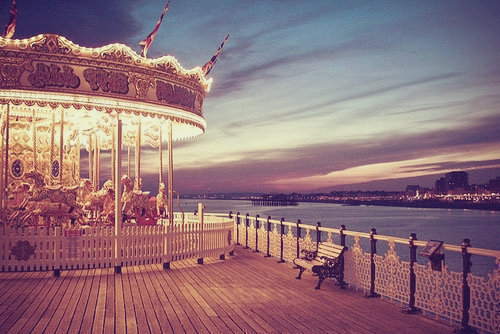 I think, it’s just the risk that you have to take.

The risk of getting hurt if trying. Of having the possibility to move on. Of inflicting and being inflicted pain in return. Of getting your heart broken. Of needing to take the pieces one by one once again.

Or the risk of regret. Of asking at some point in your life, what if I stayed. What if i tried. What if in another life, we could be together. The risk of what ifs.

My friend said, she’d rather deal with moving on, rather than haunted by the questions. My other friend thought, it’s better to never have tried, if pain is going to be inflicted in the end.

And for me, I’d rather deal with moving on.

Because time can heal pain. But nothing can heal a haunting question.