For me, twenty-sixteen started with a text.

My family – my parents, my first sister, my brother-in-law, my baby nephew and I – were spending our Christmas and New Year’s holiday in Japan. We were somewhat lost, trying to find our way back to the hotel from the train station when suddenly my cousin sent me a Facebook message: ‘Ella, are you in Japan? My father told me to tell you that Empo is currently at the hospital. She has stroke.’

My heart dropped. I re-read the message a second time. Empo was my grand-aunt who had been staying in our family for thirty-one years. She had suffered a stroke on the first of January last year, while my family was holidaying in Singapore. She now suffered a second stroke and went into coma, while we were far away from home.

I called my aunt straightaway, as Empo was brought to her hospital in Jakarta. I showed the text from my cousin to my first sister, who then broke the news to my parents while I was talking to my aunt.

‘Massive bleeding in the brain.’

‘When are you guys back?’

My brother-in-law called our flight agencies and they told us that our tickets are non-exchangeable. So we couldn’t go back. It was either we bought one-way tickets, or we stayed.

My second sister, a medical doctor who was spending her Christmas holiday in Melbourne, told us later that it was just a matter of days. We weren’t due to leave Japan for another week.

Mom and Dad decided to buy one-way tickets to go back home, while the rest of us would continue our trip in Japan. My second sister decided to fly home from Melbourne.

My aunt said that Empo kept on getting worse.

Two days into the new year, my parents and my sister made the trip to the hospital. Upon seeing Empo, my sister said, ‘It’s just a matter of hours.’ My parents were shocked. They thought that they would still have time. They thought that we, who were still in Japan, would make it home first before she passed away.

Both my first sister and I didn’t know what was happening. After dinner, we decided to do a video call with our families back home to ask for news. My Dad answered the call. He straightaway told us to say something to Empo.

‘Empo, do not be afraid,’ my first sister said. She continued to encourage her and telling her about Jesus and heaven. ‘I love you, Empo. We all care for you.’

She handed the phone to me, and I didn’t know what to say.

‘Empo,’ I began, ‘be well.’ I always said those words to her every time I was about to leave Jakarta, but it was a dumb thing to say. She was on her deathbed. She was in coma. How could I say ‘be well’? I quickly added, ‘Don’t be afraid. Believe that Jesus is real. We will all meet again one day.’

I was about to say that I love her too, but the words choked in my throat. Then I thought I saw a tear fall off, and I asked whether she was awake. My Dad said no. The phone was then given to my second sister.

‘Is she responding?’ my first sister asked.

‘No,’ my second sister said. ‘She is still unconscious.’

‘Can we talk to you in private?’

My second sister brought the phone to the bathroom, while my parents and the other relatives were singing songs to Empo.

‘How’s her condition?’ we asked.

‘It’s a matter of minutes,’ my second sister said. ‘She can pass away any second.’

‘What?’ my first sister said. ‘Why didn’t you tell us sooner?’

‘It happened quickly,’ she said, looking over her shoulder. ‘I better get back.’

‘Can we watch through the video call?’

‘You serious? Later you guys are scarred for life.’

‘We want to watch.’ My first sister looked at me with determination, and I said nothing. I wasn’t sure what to do.

My second sister went back to the room, sat on the right side of the hospital bed, and put the phone there. I saw Empo laying on the bed, being motionless, and I saw Mom stroking Empo’s hair, so gently, like caressing a newborn child. She sang a song, then uttered a prayer. After a few minutes, the doctor walked to the bed and put his two fingers on the side of Empo’s neck.

The doctor went back to put his fingers on her neck a second time. Then we heard some whispers.

My second sister’s face came back to the screen. ‘She’s gone.’

‘What? Already?’ my first sister asked.

‘We’re going to check with ECG now, but she has no breath left.’

‘Do you still want to watch?’

My first sister shed a tear and quickly wiped it. I was about to cry too, but I bit my lips instead.

‘I need to go now,’ my second sister said. ‘I need to help arranging the paperwork.’

‘Oh, okay,’ my first sister said. We were stunned for a second or two. ‘So what’s next?’

‘We will need to call the funeral house and do the arrangements,’ she said. ‘But first we would have dinner. We haven’t eaten anything.’

I saw the screen a final time. I saw Empo still laying on the bed. I saw my parents moving away from the bed. Then the call ended.

My first sister, who was always the chatty one, stumbled for words. I could see more tears on her cheeks, her eyes getting red.

She went back to her room with her husband and her baby, and I stayed there alone in my room, trying to fathom what just happened.

So quick. Painless. Peaceful. She was gone.

I was about to make tea when the tears fell.

The tears kept on falling while I was putting my shopping spree into my luggage. Then I called my partner and cried a bit more.

Our flight touched down at the airport past midnight, and the funeral was going to be held in less than eight hours. I slept at three in the morning. I woke up at seven.

Sleep deprived and overly tired, we dragged ourselves to the funeral house. I saw the flowers, the photo, the closed casket. I saw some of my relatives, asking me how I was.

The ceremony was held. The pastor gave a talk. We sang songs. Some men brought her casket into the ambulance, and we all drove to the burial site. Another ceremony was held. We sang songs. Some men lowered her casket into the freshly dug earth. We scattered a lot of flowers. The same men put the earth back. We scattered some more flowers. We had lunch. We chose the tombstone. Then we went home.

The last few days had been a blur, and it was even more of a blur for my parents. On the two days that we were not home, they held the visitation for families and friends. My second sister, who had flown back to Melbourne on the day I touched down in Jakarta, gave some sort of eulogy on the first day.

My sister told bits and pieces of Empo’s story. She loved to cook when we were little, and she made very good fried meatballs. She always wanted to know everything that was happening at home – from where we were going to when we were coming home, and from whom did the packages at home come from. We would hate it when she asked those questions, but my sister told the people that she did it because she cared for us. In her own ways, she loved us – her three grandnieces.

Later, through a video call, my second sister told me that Empo had the best death.

‘You just fall asleep and never wake up again,’ she said. ‘Trust me, it’s the nicest way to die.’

She told me that hours before Empo died, she had told Empo not to wait for my first sister and I as we would not be back in Jakarta in time. But somehow, Empo did wait for us.

Dad gave the talk on the second day. He said that Empo had been living with our family for thirty-one years, and that she was always scared of dying. For her, it was always better to live with pain rather to die as she did not know what would happen next. Dad always told her to pray that if it was her time to go, let her go during her sleep, without knowing, without pain.

You know, I almost didn’t say goodbye. It was eleven at night, and our flight to Japan was in six hours’ time. If I wanted to say that I was leaving, I had to knock on her door that very instance.

‘She would already be sleeping, wouldn’t she?’ I asked Mom.

So I went down the stairs and knocked on her door. The stay-at-home nurse opened. Her room was already dark. Empo was laying on the bed, watching the TV. She noticed that someone had entered the room, and asked, ‘Who is it?’

‘It’s Ella,’ I said. I walked towards the side of her bed, leaning forward and placing my mouth right beside her ear.

Empo nodded and asked, ‘When going back Melbourne?’

She nodded. ‘Well, then, enjoy the trip. Have fun.’ She put her hand on my shoulder and patted me. This was odd, as she was usually unhappy when we left her for the holiday. I kissed her left cheek and then her right, waving my hands and closed the door to her room.

I almost didn’t say goodbye. But I’m sure glad that I did. 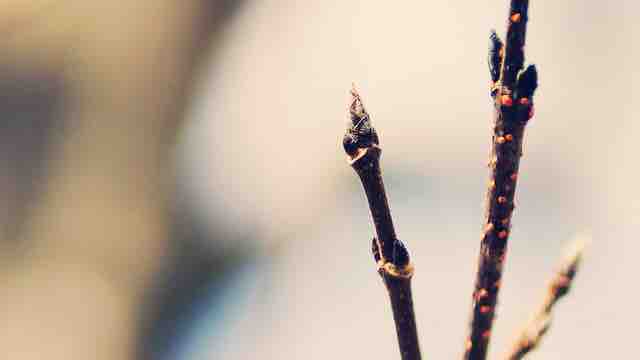