In my new book, “What I Wish I Had Known“, I share stories on surviving university and working for the first time, while learning the hard way that plans are made to be changed. Here’s an excerpt from the book.

This story didn’t start on orientation week. It didn’t even start on the first day of school, with a confused girl holding a map of the university in one hand and GoogleMap opened on her smartphone in another. This story started on a plane, but not on one that was going to Melbourne.

It all started on a plane to Singapore.

My student visa had not yet been processed. I was about to leave in one week, and I was getting anxious. Partly, it was my fault: I was not yet eighteen, and in order to get my student visa, my sister Jess needed to become my guardian in Australia. She sent through her Victorian Police Check, only to find out two weeks later that she needed to send an Australian Police Check instead. Partly, it was her fault: she thought that Australian and Victorian police checks were the same thing. So my visa had not arrived, and uni was going to start next week.

While my visa had some trouble processing, our family was shocked with this news: Ama, my grandmother from my father’s side, had cancer, which had spread to her colon. “It was a stage three cancer,” Papi said over the phone. That same day, Ama flew to Singapore accompanied by her husband—my grandfather, Engkong—and Papi. Mami and I followed two days later.

It was a long flight. I looked out of the window, seeing the blue sky and the endless possibility of life overseas, feeling disappointed that I had to go to Singapore on such important time. I had been waiting to go to university for ages. There were those people who adored high school and swore that anything would not be as awesome as being seventeen and having a lot of friends and being popular and gossiping about the girl next door. While they were living their best years in high school, I was dreaming of freedom. Perhaps on my first day in Melbourne I would accidentally meet my ex-crush, and we would rekindle our relationship. I heard that he had gone to study in Melbourne a year before. A wishful thinking, I knew, but a girl could dream.

There were those people who adored high school and swore that anything would not be as awesome as being seventeen. While they were living their best years in high school, I was dreaming of freedom.

But instead of being on the plane and getting excited to go to Melbourne, I was on a plane to Singapore. I thought about having to extend my stay and thus postponing my studies until June. What would I do for six months? Enrolling in a baking class, perhaps.

Mami and I touched down in Singapore, took a taxi to the hotel to drop our baggage and went straightaway to the hospital. The hospital was covered in white, and the smell of antiseptics filled the air. I saw old people in wheelchairs with IV stuck through their veins, behind them stood their adult children who took time off work. There were sick kids too. I couldn’t imagine what brought seven-year-olds to the cancer section of the hospital at two in the afternoon. I didn’t want to imagine.

We went to Ama’s room. Arriving there, we were told that she wanted the operation to be done the next day—no question asked, no second opinion needed. The doctor nodded and assured with complete confidence that it would be successful, and said a series of procedures to do and not to do before the operation.

My grandma, who was about one-hundred-and-sixty-centimeter tall and weighed about sixty kilos, wore her red high-heels with her head held high. She didn’t look scared.  Her face looked daring. Papi used to tell me that after the bankruptcy claimed Engkong and Ama’s car showroom business, Ama was the one who was strong enough to get back  on her feet—to get back in the game and do other business with  her relatives. They never reclaimed their former state of glory,  but they lived comfortably, giving their three granddaughters  big gifts every birthday and Christmas holiday. Cancer, it seemed, was another problem she had to face, and she was determined to win. 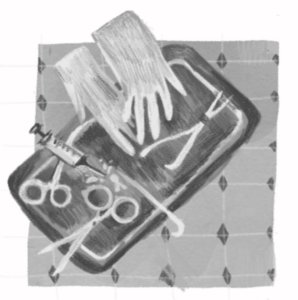 The next morning, we waited at the open room that had two sofas and one coffee table. Engkong went to the toilet every twenty minutes and Papi was praying. Mami also prayed. I prayed silently. I was still thinking of my university, but now it seemed ridiculous to be thinking about studies when Ama was lying on the operation table. My oldest sister Christina, who studied and lived in Singapore, brought us takeaway meal. I played with my phone. Listened to some music. Waited.

When the door was finally opened, the doctor smiled and gestured us to go to one of the smaller spaces beside the operation room. There was a nurse who brought a flat, rectangular silver tray and a blob of flesh the size of a small rabbit. “The operation was successful,” he said. He was wearing blue-green gloves, and he picked up the smelly flesh like a butcher picking up dead chicken at the market. The doctor pointed to the small circles that looked like oversized ulcers, which were inflamed and white in color, contrasting heavily with the deep red flesh.

“These were the cancer cells,” he said. “She would need to go through chemotherapy, of course, but we managed to get most of them out.”

That twenty-centimeter-long  flesh was Ama’s colon. Mami  put her right hand on her nose and mouth, and began to step backwards. I looked at the flesh  intently but wondering inside:  Does every doctor show the patient’s  families the torn flesh from inside  the body?

The doctor excused himself and skipped ahead with such a good mood, and we all breathed in relief. Especially Papi.

I didn’t get the perfect first-day-of-school story that I wanted. But I have the story of being there when my family needs me. Perhaps that’s the story that counts.

That night, I finally received an email telling my visa was accepted and would be ready to be picked up the next day. I told Mami the news, but decided to stay for a few more days, even if it meant that, in addition to missing the entire orientation week, I would miss the first week of uni as well.

I didn’t get the perfect first-day-of-school story that I wanted. I didn’t meet anyone who would become my best friend in the entire world, nor did I meet my ex-crush randomly on the street and batted our eyelids with each other. But I have the story of being there when my family needs me.

Perhaps that’s the story that counts.

What I Wish I Had Known is available in Gramedia bookstores throughout Indonesia. The eBook version is available through Scoop. In the meantime, click here to download your free copy of the introduction of the book.