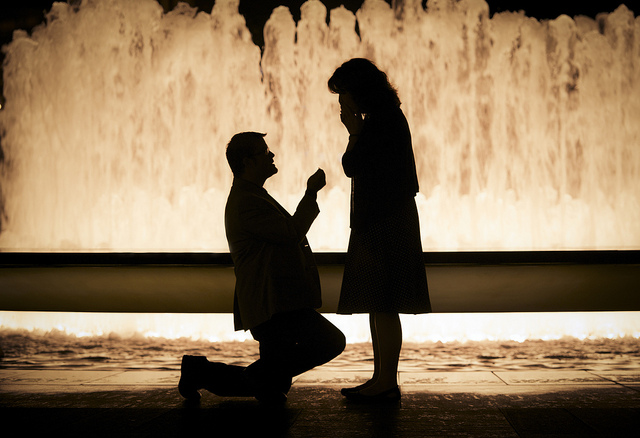 Last weekend he asked me one of life’s most important questions: ‘Will you marry me?’ It’s the question every guy hopes to ask and every lady hopes to hear.

And I said yes.

By now, almost everyone who wants to know the story of how he asked has heard it. (I mean, you’ve read my last post, right?) After I published the story, I felt a little bit of regret – should I really share it? Would people start comparing? Judging? Making fun of him? (Yes, that happened.)

Well, the damage’s been done, and there’s actually one good thing that happened after publishing the post: we literally receive no more questions regarding our proposal story. I mean, I love to share it, again and again and again, but there’s only so much you could tell via What’sApp chat.

Having been engaged for almost one week, I want to tell you that life’s pretty much normal. Despite what my friend told me on the day, I slept very well, thank you very much. I cleaned my apartment and had coffee and went out with friends.

I’m happy that I’m engaged, but apart from being self-conscious about the ring on my left hand’s fourth finger, life’s still, pretty much, the same.

A lot of people see proposal as something life-changing. It’s such an important day, and there’s so much pressure to make it perfect. It has to be a surprise. It has to be something very meaningful. It has to be grand. It has to be magical. And remember the year where everyone seems to propose with a flashmob? Yeap, good luck topping that off.

A quick Google search tells me that there are six rules of engagement:

I straightaway took a print screen and sent it to my fiancé (yes, I can use that word now), and we had a good laugh. He only followed two rules: number one and four. It wasn’t a ‘complete surprise’, but that doesn’t mean that the proposal is any less wonderful. It’s a private moment, so number five is a no-no. And nails? Well, mine looks pretty bad…

Sure, proposal should be sweet and thoughtful. He has done a lot of planning and thinking before popping the question. But sometimes in the middle of the festivities, we forget that proposal is not a one-day thing. It’s not the real story.

The real story is the relationship. It’s him and me.

I love my proposal story. It is sweet. I know it isn’t over-the-top flash mob thing with my own private videographer for the day, but it is us.

Yet I’d like to think that if he chose to ask me to marry him in the middle of eating take-away Chinese food while watching The Big Bang Theory on a Sunday night, I would still say yes, and I would still feel equally, utterly and blissfully happy.