The Dark Knight Rises might be the epic conclusion we all have been waiting for, but it falls short of my expectation. 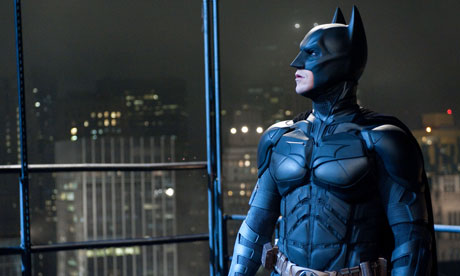 Christian Bale as Batman in The Dark Knight Rises. Photo by Ron Phillips

Christopher Nolan’s final movie of the Batman trilogy has got everything to make it a fantastic movie. Sadly to say, it is just a great one.

When I first watched the trailer, I thought that this movie has the potential to get the spotlight from X-Man: First Class (2011) that stole my heart last year. Partly, it is my fault to hope too much, as the second movie, The Dark Knight (2008) is already a bombtastic movie. The bar has been set way too high.

Batman (Christian Bale) has been gone for eight years. Harvey Dent is proclaimed the war hero, and Gordon (Gary Oldman) has been able to keep peace inside the Gotham city. People have not forgotten Batman, no, but they remember him out of hatred, for all believe that he is the one who murdered Dent.

Living his life in solitude, for he has still felt the pain from losing his dear Rachel, Bruce Wayne never sets a foot out of his room. Not until Selina (Anne Hathaway), a slick Catwoman who steals from the rich to eat, disguised herself as one of his maids and takes away Bruce’s mother’s pearls.

Selina tries to exchange his prints with a program that could erase all her criminal records. Nevertheless, she is betrayed, for Bane (Tom Hardy), the new antagonist who wears a scary mask that looks like it comes straight from GI Joe, has another plan for Gotham – to wipe everything, and start afresh. 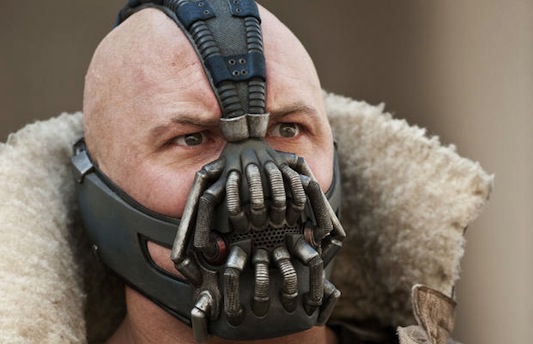 Tom Hardy as Bane in The Dark Knight Rises.

While the ending gives an interesting twist, I was disappointed. I remembered how awed I was when watching The Dark Knight, and how Joker (Heath Ledger) has bewitched me, for he was pure evil. But the confrontation between Bane and Batman is not the confrontation of mind, power, and physical abilities. It’s just merely physical.

While the effects are good, they are not as great. The motorcycle is a hit, but other than that, I would say nothing more. Joseph Gordon-Levitt played the idealist policeman character Detective Blake very well, though.

But I don’t see the conflict between Gordon and the others when the people know that Batman didn’t kill Harvey Dunt. I don’t get enough frustration, anger, and sadness when Alfred (Michael Caine) told Bruce that Rachel chose Harvey over him before she died.

I don’t even hear half of the conversations correctly because clearly, Batman is manipulating his speech into a very low tone, husky, inaudible voice, and Bane has a huge mask covering his mouth which alters his speech into pretty much barely audible tone. Sorry to say, I’m still a second-language English speaker.

The ending? The second last bit is the hit, but I hate the ‘ending’ ending. Frankly speaking, I would rather leave it on a realistic side. It would have resonated deeper with me. Go watch the movie and you’ll know what I mean.

I have to say that I have expected this movie to be much darker, but I find that it’s trying to focus on too many things at once (character, plot, effect, happy ending) that it sways a little bit from what’s important. There’s a reason why Batman is called the ‘Dark’ Knight. I see the reason on the second movie. I don’t see it in this one.

The Dark Knight Rises is a great ending for the Batman trilogy. Christopher Nolan is indeed a genius. The casts are impeccable. The effects flawless. But I wish there’s more to it than just predictable plot and great effects.