Guess I woke up on the wrong side of the bed this morning, because by 10 am, I have found myself at the Emergency department of a hospital nearby my office. 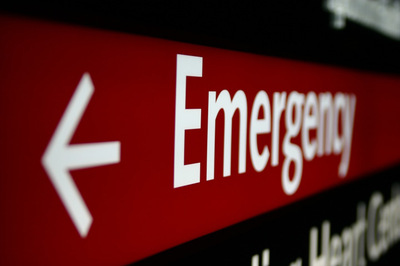 My colleague was making instant noodles and even offered to make one for us. I was tempted, but politely declined as I just had a big breakfast that morning.

I put my earphones on, turned the volume of the music on, and got back to my laptop.

Fifteen minutes later, another colleague frantically tried to find tissue and took some from my desk.

I still had my earphones on, and hadn’t a clue.

Two minutes later, I was changing my sitting position when I realised that my colleague was holding her right hand with bundles of tissues that had turned red.

Long story short, we found ourselves in the Emergency department of a nearby hospital fifteen minutes later. She cut her hand (just below her right thumb) quite deeply while doing dishes as suddenly one of the glasses broke.

Her cut required four stitches, and I had no idea of what’s been going on in her mind and heart. Like, if she was scared or in pain, it didn’t show.

She was really calm, considering what she had gone through. She asked questions and even be involved of the process – pouring the neutral liquid to clean her hand, staring at her wound while the doctor was stitching, witnessing occasional burst of blood (the cut got through her vein).

Which makes the point of this post: i really think I trust people easily.

Like, if I were her, I would not question the doctor at all (why should I, he’s the doctor, and all those fancy medical terms will be forgotten in twenty minutes time). When the Doc asked me to lie down, I would (she sat on the side of the bed instead). When the Doc was doing his things, I would not give suggestions or ask questions.

All those time seeing my colleague and thinking what I would have done instead, I chuckled to myself, saying, “Gee. I must have really trusted this Doctor.”

And actually, I have that trait in everything I do.

My best friend once told me back in high school that I trust guys too easily (she kindly told me I was naive and that made me got broken by guys too many times). But she also said that that trait makes me like this: when I love someone, I really love him 100 per cent of who he is as a whole, regardless of his flaws.

When talking about family investment (yes, I am trying to enter the world of adulthood), I just trust my Dad of his choice while my sisters asking for details.

Of course, this trait has its own pros and cons.

By trusting people, I have put a little bit of faith in each of them, and it will put my heart at greater risk for being broken.

And as it is human tendency to make mistakes, I would get my heart broken many times (considering the number of guys who broke my heart back in high school, perhaps it’s true).

I am not instinctively critical of the situation around me (I’m more of a gut feeling type of person), and at times it may cause significant drawback (my Mom always scolds me for my inalertness/overfriendliness to strangers).

But I also know that even when I can be broken down to pieces in a minute, I can also pick the pieces up in another (not literally).

That’s not saying that I’m immune to hurt, it’s just that I have a tendency to be vulnerable and open to people (guess this is the answer to a friend asking, “How can you share such private stories at such public spaces?”).

Is it a good trait? I have no idea.

I’m just amazed at what I’ve learned about myself at an Emergency department at 10 am in the morning.

Ps. This post is written on Monday last week.