I rarely do a video chat with my friends. With a partner is an entirely different case, but with friends? Almost never.

For me, video chat is a very intimate way of conversing with another. It’s even more intimate than going out just the two of you. Why? Going out is public. Talking to a friend, in front of your computer screen, in your bedroom, with your headset, is very… intimate.

To this day, I never actually had a video chat with the opposite sex who’s just a friend. I would feel anxious, agitated even – seeing his face and listening to his voice while knowing that he only has me in front of his eyes (it’s not like I can look at the scenery or comment on other people’s food orders or something like that) make me uncomfortable. 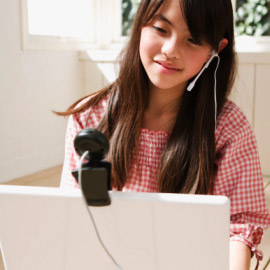 The thought on this matter came a few months ago when the three of us, a male friend, a female friend, and I, were having lunch together after lecture. The female friend told us stories that she just had this video chat with her male friend who lives in London. Almost instinctively, without really looking at each other, my male friend and I said, “Awwwww,” in unison, thinking there must be something behind that. Yet she insisted that they are just friends.

“Is there something wrong with video chatting with a friend of opposite sex?” she asked, obviously finding our views very weird.

“I wouldn’t talk with a guy through a video chat, moreover for hours – chatting, talking, laughing, or sharing about our personal issues and stories. By listening to your stories alone, I personally think that he’s interested in you,” I said.

She then tried to convince me that there is nothing between them, again.

Trying to get some support, I asked my male friend (who has a girlfriend) of what he thought about video chatting with opposite sex.

“It’s more justifiable when both parties are single. But if one of them is in a relationship, it’s a big no. I wouldn’t like my girlfriend to be video chatting with some random guy…” he said.

Well, I’m also a believer of there is no such thing as platonic relationship, so…

I was asking another friend, male, 20, about this matter and he says this without even skipping a beat, “Well, if it’s one on one I don’t think it’s okay. Because you normally do video chat at home, right? That’s a private place, and you will do a private conversation.”

You see? I’m on the right track.

Of course, there are also some people who say otherwise. Another male friend, 20, says, “I am used to video chat with a female friend all the time. It’s not a big deal.”

Maybe if you’re both single, I wouldn’t make such a big fuss about it. But you see, this friend of mine is chatting with a female friend who already has a boyfriend.

I wonder what would I do if I find out my boyfriend regularly talks on video chats with his female friends. Even if they are his best friends, and there are no potential threats of cheating, I would still be against it. I’m a firm believer of not playing with fire, and you know what?

Sharing too many laughs can just do the trick. I wouldn’t want him to be video chatting regularly, not even once in a while. No. Hell, no. It’s too personal.

The thing is, video chatting is all about getting comfortable. And if you get too comfortable with a certain someone of the opposite sex…

It is even worse than sitting together in a car, just the two of you, for two hours. Because it’s not only chatting, it’s seeing the opposite end being very relaxed in his or her own personal space (home or bedroom) and giving 90 per cent attention.

At least in a car ride, you can pretend to tend to your phones, look at your surrounding, listen to the radio, or sing some songs.

What do you think of video chatting with a friend of the opposite sex? Is it an innocent game or playing with fire?