Interested in knowing more about The Hunger Games and its reviews from people, but too lazy to do actually find it out? Don’t worry, I’ve done the legwork, so just sit back and enjoy the ride. 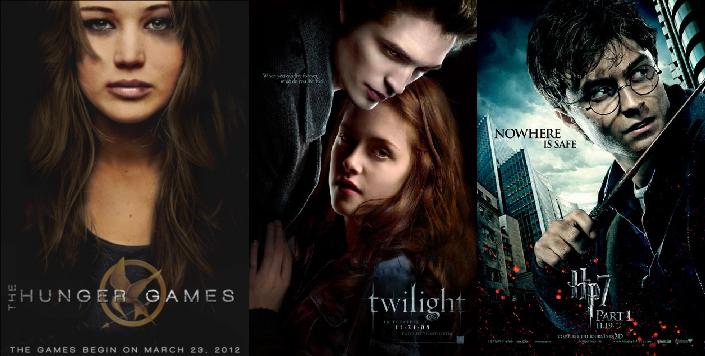 First of all, if you don’t know what The Hunger Games is, it’s a novel by Suzanne Collins that has been adapted into a movie. It’s released about a week ago, and since then the movie has gone viral. If you have no idea whatsoever and yet too lazy to Wikipedia it, read my review on The Hunger Games (2012).

Reviews are storming in, both good and bad, both critics and praise, towards the movie. What’s interesting is that the movie is reviewed from all sorts of angles: from the basic comparing it with Twilight series or Harry Potter, to racism, boy-girl relationship, and even feminism.

And as a big fan of Harry Potter (totally one of the best series I have ever read in my life), a hater of Twilight (hate is a strong word here, I might need to lower my hatred a bit), and a neutral viewer of The Hunger Games (the social discrepancy intrigues me, but to be honest I’m not even half-amazed), here’s what people are talking about:

1. The Hunger Games vs Harry Potter

First of all, my friend, Andreas Chan, made a decent point about the unfairness of comparing these two very different sets of books. Given both are fiction teenager novels doesn’t mean that we can just say that one is better than the other, or vice versa. He said:

I think it is not fair to compare Hunger Games trilogy to Harry Potter, since the story, setting and plot itself is totally different. If Hunger Games includes elements of wizardry, potions and a character like Snape then I will compare it to Harry Potter. …Basically they have their own charms, so don’t buy the idea that every book must have the same charms.

I agree on this view, however, many people say that The Hunger Games is the next Harry Potter, and I highly doubt that. Let me rephrase it, I completely reject that idea. Whether you like it or not, Harry Potter is phenomenal. It changes the society view of how good and entertaining a book can be, both on the teenager level and the adult level. You can have a heated argument with me about this, but let’s keep that for later.

Harry Potter has seven books (eight movies), while the Hunger Games has three. Suzanne Collins is enjoying her success, but J.K. Rowling is the world’s first billionaire by books, according to www.guinnessworldrecords.com.

People waited at midnight for the release of the seventh Harry Potter book, and I refused to sleep until I finished it. I never finished the last Hunger Games book, and I know I wasn’t alone in my feelings about the less-than-spectacular ending.

2. The Hunger Games vs Twilight

This is even more… ehm, how should I say this? Let Andreas Chan said it for me again:

…to compare it to Twilight is like comparing European luxury cars to American muscle cars..one is built with quality and technology to ensure customer’s satisfaction while one is built with massive engines that kills polar bear every 40 miles while ensuring customers their cars are ‘green’ but yet people still buy them for reasons that are unquantifiable.

I can’t deny the fact that Twilight is not phenomenal. It is, in its own rights (we’ll have a very good heated argument about this). But seriously, I believe in every word of this infamous quote:

Harry Potter is about confronting fears, finding inner strength and doing what is right in the face of adversity. Twilight is about how important it is to have a boyfriend.

(ps. before you throw rocks at me, I’m not saying that Stephen King is the one who says this. There has been a heated debate about this matter, I’m not going there. I’m just saying that for me, it’s really true).

I would like to see someone trying to add one more sentence about The Hunger Games… But anyway, you get what I mean? (Twilight fans out there, I’m sorry, we just have to agree to disagree).

To get more factual rather than emotional, let me quote this from Hunger Games vs Twilight: Why Games rule, … vampires suck which is published on the Strait Times:

One does not like to compare apples with oranges but The Hunger Games versus Twilight is more a case of apples versus artificially fruit-flavoured chewing gum.

Here’s another criticism from literacy point of view on The Case agaisnt Twilight:

Stephenie writes some weird sen­tences. And I don’t mean in the sense of, “Oh, Bella is expe­ri­enc­ing vam­pires for the first time; obvi­ously things are a lit­tle weird.” I’m talk­ing about sen­tences that are like run­away trains that ram­ble on and on, using semi­colons as period place­hold­ers. No, Stephenie. Finish the thought and be done with it already.

3. The Hunger Games vs Twilight vs Harry Potter

I won’t be repeating myself for the third time, but I find this article beyond hilarious: An Imagined Girls Night With Katniss Everdeen, Hermione Granger, Bella Swan And Buffy Summers.

Katniss: Moving on… So, how was everyone’s week?

Buffy: I was saving the world.

Katniss: I was also saving the world!

Bella: I jumped off a cliff to get the attention of my ex-boyfriend.

Katniss: This conversation is getting weird. Can I have some of those Doritos?

Bella: So Katniss, who are you going to choose between Peeta and Gale?

Katniss: Well, I hadn’t really thought about it. Leading that whole revolution thing has left me super busy and all.

Bella: But who will it be!! Which one makes you feel complete inside?

Katniss: Um, neither? It’s mostly just trying to decide whether I want to have a good hunting partner or a boyfriend who knows how to work the bread machine.

Bella: OMG I have no idea what I would do in your situation. …What about you, Hermione: Harry or Ron?

Hermione: Um, Harry has always only been my friend. It’s always been Ron for me. But I thought tonight wasn’t talking about boys, and that’s all you seem to want to do! I came here for a girls night, not a “bitching about boys” night!

Katniss: I only care about guys when it comes to how they can help me save the world.

Buffy: Absolutely. We have far more exciting things to talk about. Like weapons.

Bella: But boys are obviously the emotional crux of our lives! Edward practically looks at me the wrong way and I go into a helpless, emotional coma for eight days! He is my absolute everything and I can’t be a functional human being without his existence! What else could be more important in your lives than your man?!?!? What the hell else could ever be harder in your lives?!?

Katniss: I’ve been kind of tied up dealing with this whole reality TV death match I’ve been forced into, that’s also turned into a full-scale rebellion against the leader of my dystopian, totalitarian society, all the while trying not to starve to death and provide for my family.

Hermione: I just had to wipe myself from the memories of my parents, as I set out on a road trip where my two best friends and I are being hunted by a band of insane fascists, working under the instructions of the wizarding equivalent of Hitler. One of them tortured me, and there is a constant fear of being hunted down and assassinated.

Buffy: I spend every single day of my life battling evil vampires, and am constantly saving the world from demons, angry Gods, and the Root of All Evil itself. My mother is dead and my sister isn’t technically a real person. I have technically died twice. You and your man troubles take the entire women’s movement back decades.

Bella: Hmmm, I think I’m going to take this moment to go to the washroom.

If you are interested in reading more about the books, a fellow blogger has done it for me: Harry Potter vs. Twilight vs. The Hunger Games. I strongly encourage you to read this post.

Okay, basically these stuffs are the meat of what I want to share, the other reviews are great, so if you’d like to take a look, please consult:

The Hunger Games is a great movie with its own charm. It talks a lot about our social issues and makes us redefine what it is to be ‘humane’. However, so does Harry Potter, and Twilight. Hard-core fans of these stuffs out there, I respect your own preferences, so please don’t throw rocks at me.

Sure, for me, Twilight wrecks my mind about what I think as an ‘ideal’ boyfriend and all the stuffs that I should be doing (finding my ‘Edward’) at 18 instead of finishing my education and living my life, but so do Nicholas Sparks’ books, and so do Hollywood chick flick movies.

My own grudge against Twilight is just… I wish Stephenie Meyer does a better work in developing their characters (we don’t know much about Edward and why is he that charming and romantic, don’t we? We don’t even know much about Bella’s character development, and damn, why does she love Edward so much? To me, it’s more like infatuation and obsession instead of love…).

Okay, Kirk out. May the odds be forever in your favour.