It was just another Sunday afternoon after church.

We were chatting and laughing and updating each other about life when suddenly, we heard the shocking news from one of our beloved leaders: he would be going back to Indonesia for good.

He had been in Melbourne for more than ten years, had served in the ministry for so long, and had been anonymously voted as one of the best worship leaders we ever had.

He had a stable job, a house, and a family. His first baby daughter had just been born. From our glasses, he had no reason to go back home. Life was exponentially better here.

I addressed the question that had been sitting restlessly on our minds. Why?

“Marcella,” he said with a laugh, “If it’s not us who build our nation, then who will?”

He talked about other stuffs then, from the moving preparation to irrelevant hi-bye things. But that sentence resided on my head ever since.

If it’s not us who build our nation, then who will? 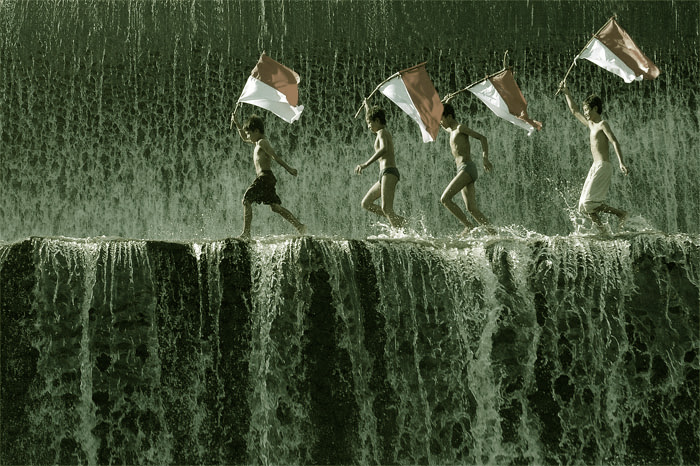 Here is a man who, in everyone’s eyes, has got everything. Respected by all, he is the type of man who every woman secretly hopes to marry one day. Money is not an issue. He sings. He leads. He cares for his family. He proposes his wife at the airport, singing one of his own composed love songs. He has a comfortable life in Melbourne. Why does he give all comfort away for the sake of building our nation?

Indonesia, whether you know it or not, is a battlefield of politics. Money is power. People who have money controls the power. People care only for themselves, and if they are going to forsake innocent people in the middle of their roads to glory, they will do it without a second thought.

Corruption is the norm. The rich gets richer, the poor gets poorer. We sing our national anthem once a year during our independence day, but truth is, we are not yet independent. We are still, in a sense, chained to our own selfishness. We are not free men, instead we are bounded to play the game set by the so-called ‘leaders’. If not, don’t expect that you’ll get an easy life.

You might not want to give ‘extra’ to some governmental parties, but if not, your papers will never be ready. The mindset of people is still… well, what’s the right word? Prisoned. The people don’t think much about the future, but instead focus more about the ‘now’.

And what about the others who have the potential to make the difference? They flee. Many of them tried, of course, but are left being cheated and discriminated. These people want to help, but what’s the use of helpers if the people who need help, don’t want to be helped?

Yet, there are people like my leader, who have everything handed to them on a silver platter, but still decide to go back and make a difference.

Because if everyone abandons what supposed to be their duty, then, who will?