ALL cheered when Toothless the Night Fury left the stage. Yet it was not one of the grand closing applause we used to hear after a show is finished. It was a cheer in a hope to bring the dragons back to life after the third technical difficulty happened during the show. 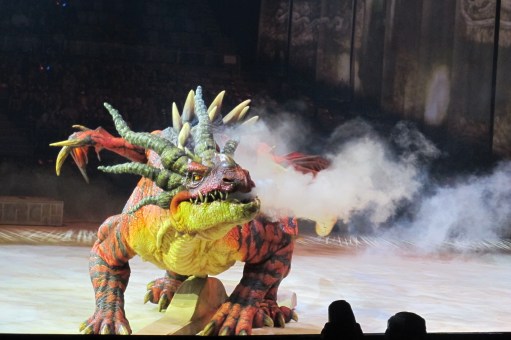 After the opening night cancellation of the How to Train Your Dragon Arena Spectacular World Premiere on Friday, 2nd of March (read more here), the Saturday’s opening show was greeted with much enthusiasm from both the audience and the crew.

Not less than 7,000 audience have been fighting each other to find a decent parking spot near the Hisense arena, and most were soaked wet due to the rain.

Although the 3pm show was running late, the excitement of seeing life, flying fire-breathing dragon came as soon as it started.

The first one-and-a-half-hour of the show was a total success – the audience was amazed and pleased, and everything was going well.

At 4.30pm, adults and children rushed outside to grab some food and drinks.

However, the 20-minute recess soon became a 60-minute one, and the adults started to feel that something has gone wrong.

After two-and-a-half-year of preparation and hardwork for the show, the casts were clearly disappointed as they struggled to make the story reached its climax. The show resumed at approximately 5.30pm, but in the next 30 minutes, it was halted twice due to technical difficulties, and some families started to head their way home.

As more than half of the audience were restless children aged below ten, parents were now struggling to entertain them. Other adults with no children began to take out their smartphones and do their business. A few were constantly checking their watches.

After three-and-a-half-hour of battle to make the dragons come to life, the supposedly two-hour show has finally come to an end at 6.30pm, with the climax and ending squeezed into an 8-minute fast-forwarded scene.

At this time, nearly half of the audience was gone.

“I sympathise with the director and the team because there are going to be lots of complains. They will be very stressed,” said an audience Jessica Purnama who attended the show with her boyfriend.

Despite the technical glitch, Jessica’s boyfriend Pohan Lukito said that he has seen about 80% of the show, and he was happy.

“The show was good. I don’t have any grudges,” he said.

Complimentary tickets to return to any of the other scheduled Melbourne performances were offered to the audience.

Dreamworks has pushed the boundaries, and the dragons are the proofs. Before the technical difficulties happened, the dragons were eating, walking, flying, and breathing fire. The casts have performed new tricks that will soon be adapted by thousands of other shows around the world.

A combination of life performances, digital imaging, sound, and lighting, the show would be total success if all was running smoothly.

The show started with the narrator bringing all the audience back to the era of the Vikings, where flash photography and live recording would anger the dragons, and mobile reception would not be available for at least 1000 years later. All people were seated comfortably in their seats, feeling enthusiastic while seeing the crescent-moon Dreamworks logo put up on the screen.

When the first dragon showed up, all cheered.

Each of the dragons were remarkable. The scales, the size, and the colours were shown in an extensive amount of details. The Night Fury, the Monstrous Nightmare, the Gronckle, The Green Death, and the Deadly Nadder, among others, were present.

Children began to stand against the rails, amazed and excited to see their favourite mythical creatures right in front of their eyes.

And the dragons blinked. They did.

When the dragons left the stage, the audience clapped.

One of the most remarkable scenes was when the Vikings tried to educate the new recruits about the dragons. Utilising a very big screen, paper shape ornaments, and lighting, the crew was able to twist the story with the forgotten story-telling technique.

The first flying scene of Toothless and Hiccup was also spectacular to watch.

As one of the other 7,000 audience to watch the world premiere How to Train Your Dragon Arena Spectacular, the show has surpassed all my expectations. I would love to watch the show during its prime time, but seeing a glance of the promised land was satisfying enough.

It is indeed hard to train your dragon, but at least they are ambitious enough to try.

How To Train Your Dragon Arena Spectacular is an epic arena adventure inspired by the Academy Award® nominated DreamWorks Animation film, How To Train Your Dragon which grossed approximately $500 million at the worldwide box office and was among the best-reviewed movies of 2010. The show is on their way to a five-year-tour around the world, with the near future shows include the dragons going life in Melbourne, Sydney, Brisbane, and Auckland. For more information about the event, please consult Ticketek website, or the show’s official Facebook page.