When we brought home two medium-sized orchids from the Melbourne International Flower & Garden Show last month, our apartment was already full of plants.

In our humble two-bedroom, one-bathroom residence, we have a medium-sized peace lily, two terrariums (one big, one small), a small peperomia, four bonsai plants (all small, thankfully), and two herb pots (basil and chive).

With the exception of the bonsai plants (jade, juniper, buddha belly fig), all the others reside in the living room. So with the arrival of two orchids, we have to make room for them.

“Probably the peace lily should move,” Tjok said. It was situated on the small marble table beside the sofa, and I do agree, it has to move. (I always felt like the peace lily was too big for the table anyway). So we moved it to the floor just beside the door to the bathroom.

Not ideal, but it would do for now.

We placed the bright purple orchid on the marble side table. One down, one more to go.

“What if we put it behind the peperomia?” I asked. The plant was sitting on top the TV cabinet, just next to the window.

He decided that the white orchid would sit in the middle of the coffee table. It would have to share space with the small terrarium.

I was not convinced. But we’ll see whether this arrangement would work. 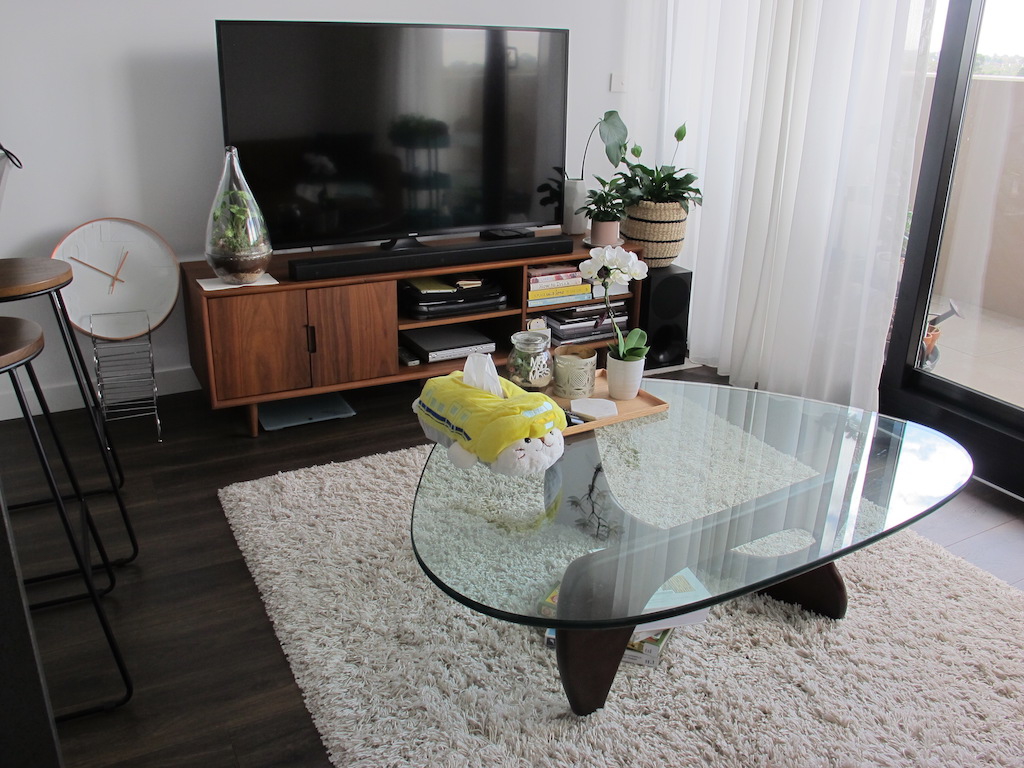 Find the plants in this photo: two terrariums, one orchid, one peperomia, one peace lily (which I moved there to be included in this photo), and one monstera cutting. Ignore the clock sitting on the wine rack—it fell off from the wall the other day and we are still too lazy to put it back up. 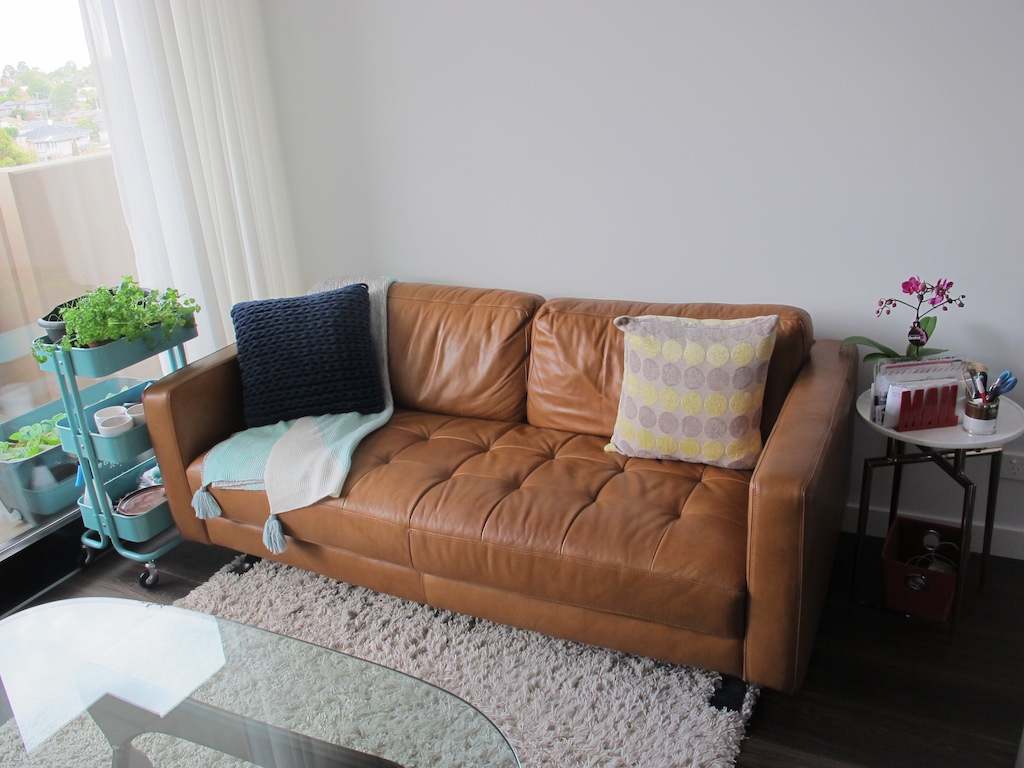 Notice the bed of herbs on that pretty Ikea cart? 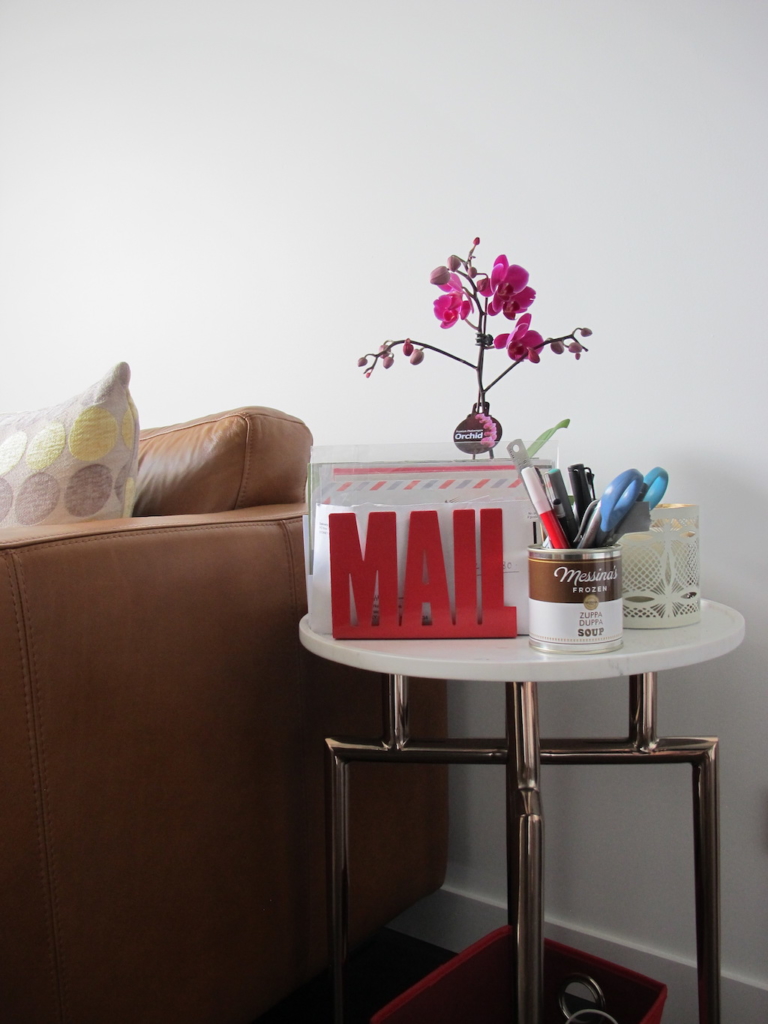 The orchid on the side table. 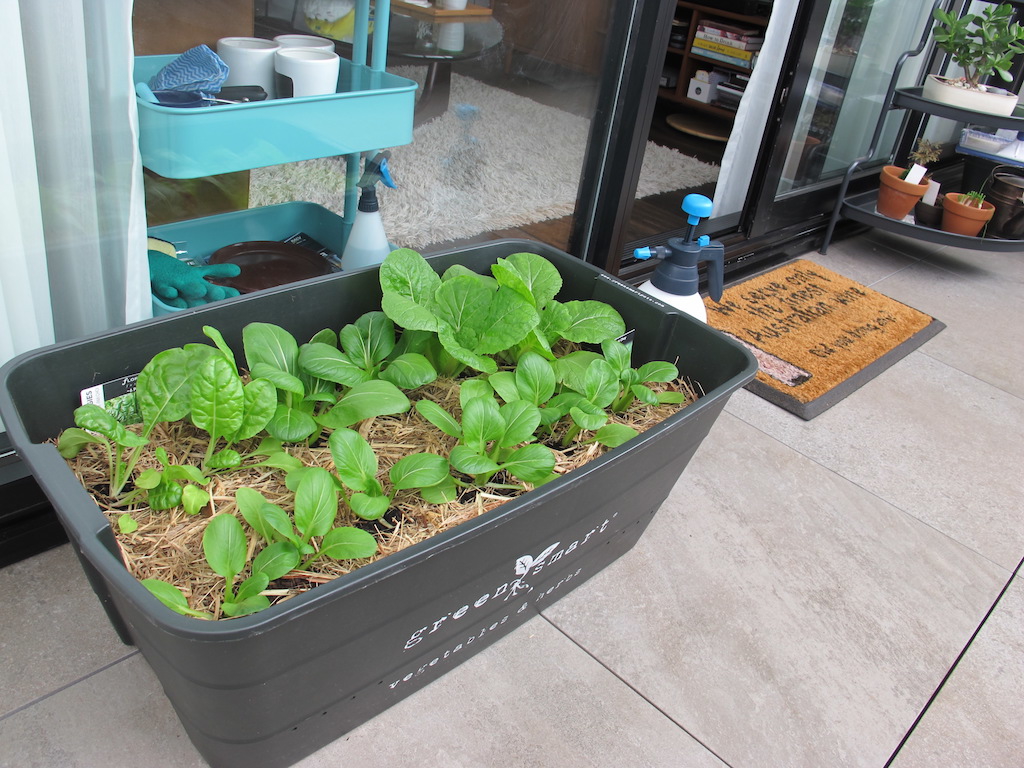 The vegs were seedlings when we first transplanted them and they have grown… quite a lot. I think we underestimated how big they are going to grow. Might need to transplant a few of them to a new home soon. 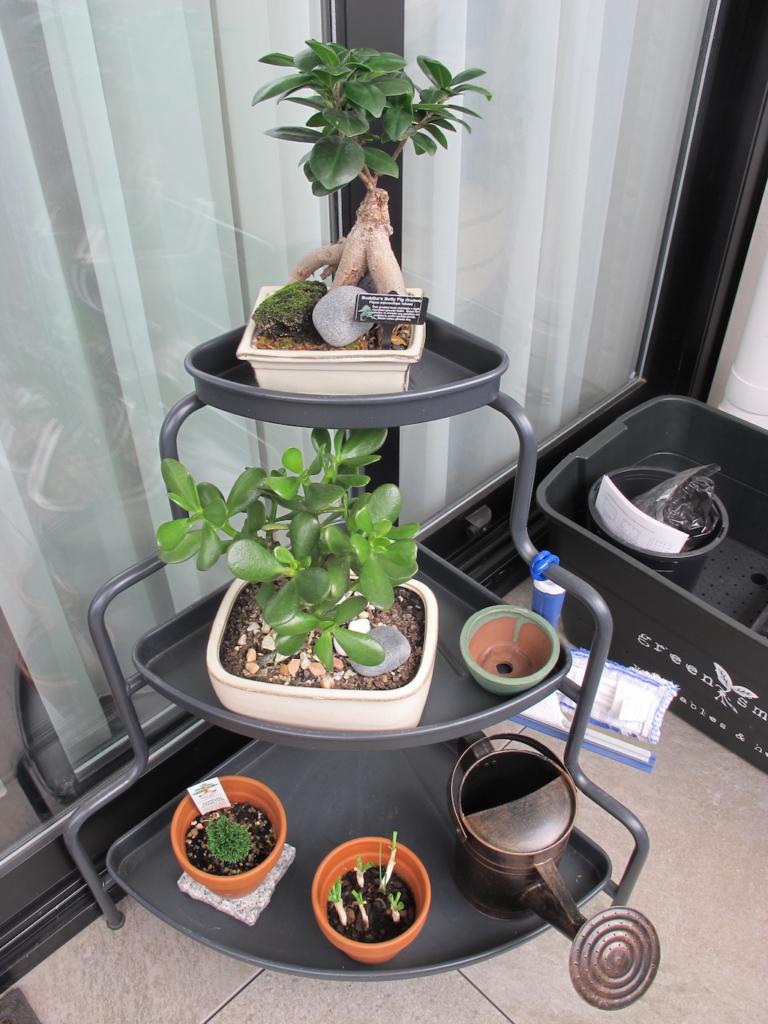 The mini bonsai garden that Tjok loves so much. Ignore the spring onion.

Where’s this obsession of owning plants started? I’m not entirely sure.

In my old apartment, my sister and I occasionally had plants, mostly orchids which she’d gotten from her patients. They died. The only plant that was my own was my very first terrarium which Tjok bought for me as a Valentine’s gift. It died.

Then Tjok, who had been renting his whole adult life, moved to his own apartment. He quickly bought two terrariums (against my protest because they were expensive). Then he bought a bonsai plant.

Then we got married, and I moved in.

Perhaps I should already know what I’m getting into—after all, I married a landscape architect. Every time we are on a date and he sees an interesting plant, or a wooden structure, or any kind of interesting urban design, he would stop and stare intently at that thing from every angle for ten minutes, before finally taking a picture. He even has one of those paid apps where you can upload a picture of a plant and get the name of the plant. Dedication, isn’t it?

Plus, during his wedding speech, he actually said, “I have this image of us old and wrinkly, and you, baking in the kitchen, and I, working in the garden.”

I should have known that my marriage would be full of plants.

I have this image of us old and wrinkly, and you, baking in the kitchen, and I, working in the garden.

A few months into our marriage, we bought two more bonsai plants, and acquired a cutting of jade plant from my sister, which we made into another bonsai. I started becoming obsessed with cooking, so I warmed up about the idea of having plants, or more precisely, herbs. Tjok bought the seed starter kit for chive and basil, and they do grow. At least for now.

When my parents visited in February, my mother saw how dedicated Tjok is in tending his mini bonsai garden. So she bought us the peperomia and peace lily.

I was first indifferent to all these plants, and sometimes got annoyed at Tjok for going straight to see the bonsai plants after coming home from work. But greenery does transform a space, and in the spirit of solidarity (and wanting to score a point from le husband), I borrowed a few gardening books from the library.

Before long, I’ve become the one who obsessively checks the plants every morning.

I learned to love what my husband loves doing, and I surprise myself by actually falling in love with it. I find satisfaction in the fact that these plants are still alive. And while we spend more time in Bunnings (the mega store that has a massive outdoor gardening section), browsing on bonsai, flowers, herbs, and vegetables that we will not bring home, I discover bits and pieces of happiness in having the same hobby as le husband.

Now, Tjok is the one who says no when I try to bring home another houseplant. Probably we’ll wait until the spring comes before adding anything.

…Then I come home from my sister’s place with a cutting of monstera leaves. (Which will grow roots! And become another houseplant!) So much for promising to not adding anything to our humble abode for a while.

Ps. To be perfectly honest, we killed some plants along the way as well. While plants come with manuals, they can’t really say what they really want. (Too much water? Too little water? Too much sun? Not enough sun? WHAT DO YOU WANT WHY DO YOU JUST WITHER AND DIE.) Anyways, RIP to those little greeneries who have believed in us. We’ll try to develop better, greener thumbs next time.