I like science fiction movies. So despite its lack of origin, description, and logic, I still enjoy this movie. Perhaps because it has Tom Cruise in it. Or not. 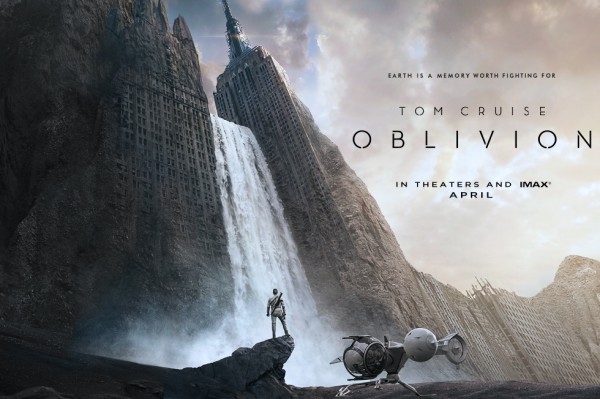 It’s post-war. Earth has been invaded by aliens. The moon is shattered, leaving the earth in chaos. To fight, we need to use the nuclear bomb. We won the war, but lost the earth.

All humans are on the large spaceship, waiting to go to Titan, one of Saturn’s moons, to start new lives. Two people, technician Jack Harper (Tom Cruise) and his communication officer, are two weeks to finishing their mission on earth. Then they will join the rest of the humans and go to Titan. For mission security reasons, their memories are wiped out so information will not be gotten from him, in case if the alien ‘scavengers’ manage to capture them.

But Oblivion then tells a different tale. Jack remembers. He dreams fragments of his previous life. He has memories. Now, he’s trying to seek the truth.

It’s a science fiction movie with really, really cool technology but a lack of action. It has an interesting plot, but I’m really hoping the story is more developed. Tom Cruise is still good to look at, so that’s a plus.

All-in-all, it’s an entertaining movie. But if you’re looking for the next Prometheus or Star Trek, well, this is not it.