I was watching TV with Tjok—my husband—when he started to annoy me. He nudged me, made funny faces, and asked me questions on unrelated topics.

I was still staring intently at the TV, being in the zone where the super cute, nice Korean guy professed his love to the nice, slightly prideful Korean girl with super smooth white skin. She previously said she didn’t like him that way, but it’s a K-drama, of course he persevered. Cue in the emotional soundtrack with the word sarang repeated over and over.

Tjok stood up and pretended that he had a violin and started moving his right hand back and forth.

“You’re the one who introduces me to K-drama,” I said. “Your fault.”

“Yah, it’s good,” he sat on the sofa again. “Just too cheesy sometimes I can’t stand it.”

“Doesn’t mean you need to ruin my Korean moment.”

“You also annoy me during my movie time.”

“I was nice to you yesterday,” I said while watching the cute Korean guy hugging the girl. “When you’re watching that Predator movie.”

“What?” Tjok gave me a look. “You always annoy me whenever I’m watching.”

Then he continued to nudge me with his elbow. Took my blanket. Attempted to tickle me. Asked me questions.

“Just do the dishes and let me enjoy my Korean moment in peace lah.”

Afterwards, when Tjok continued to disrupt my Korean moment for the nth time that night, I said to him that we need a new definition of marriage. It’s certainly not asking each other “What’s for dinner?” until death do us part. It’s “Annoying each other until the end.”

Which sounds quite legit. 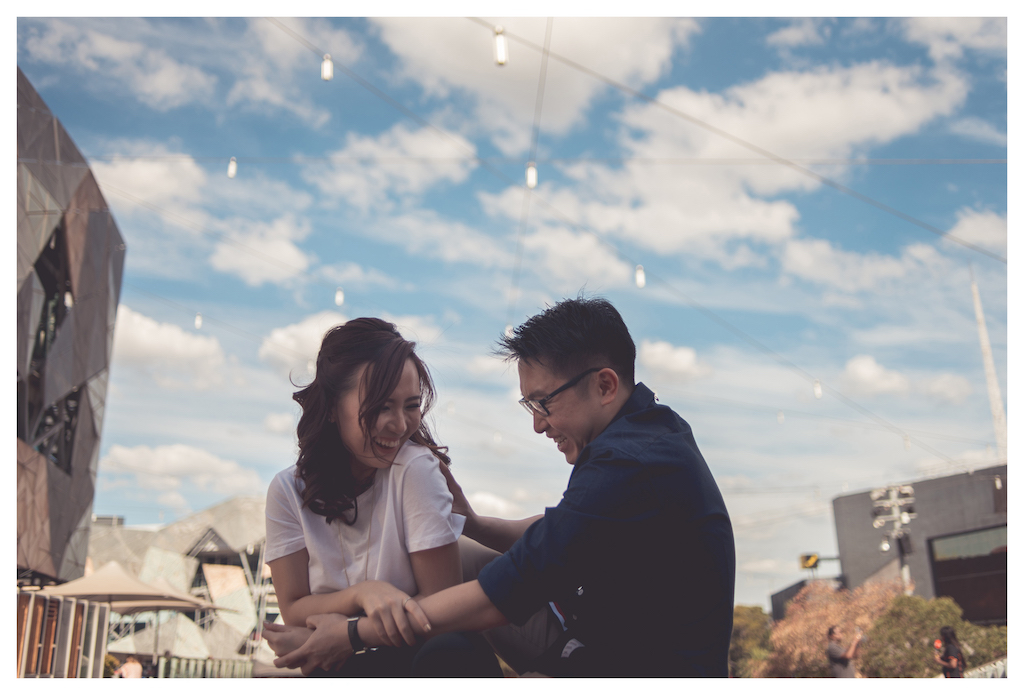 Tjok and I have just celebrated our first anniversary.

And life is good. Life is so good, in fact, that sometimes the both of us forget what it felt like to be in long distance, to quarrel on our relationship like we used to do merely a year plus back. We no longer have fights because of the distance, although new quarrels come to replace the old ones—mostly it’s about household chores.

But I can really say this for sure: marriage means to annoy each other.

There will always be something of what other person does that annoys you. Probably you’ll get annoyed on the way he throws his socks on the floor. Or the way she squeezes the toothpaste. Or the way he fills the sink with dirty dishes but not the dishwasher. Or how each has his or her own preference in watching movies and disturbs the other during this sacred time. (True story).

That said, as annoying as my husband can be, making me laugh during crucial movie scenes where I’m supposed to be crying, I think I’ll miss it if he doesn’t do it.

I remember—quite tenderly, in fact—of how my father annoys my mother all the time. Thirty plus years of marriage, and he would still stroke her arm repeatedly. He would hold her hand when she’s busy doing other things, or talk nonstop when all my mother wants is a quiet afternoon. (My mother tells me later that guys become so much chattier as they grow older. Uh-oh. I suppose it’s good that Tjok is currently an introvert.)

My mother would get visibly annoyed, telling him off a couple of times, in which my father would laugh and continue to annoy her.

My mother annoys my father all the time too. (Or perhaps ‘nags’ is a better word.) But my father always says to me, “You probably don’t like your mother’s nagging now, but if you’ve lived with her as long as I do, I feel like something’s missing if I don’t hear her nagging every day.” It’s probably the same as my mother being accustomed to my father’s snore, as annoying as it is, she will have trouble sleeping if my father is not there.

I see that as a sign that they’re still deeply married.

I’ve only been married for a year. But I could say this with a smile on my face and love in my heart: I’d gladly marry my husband again even if it means we’ll annoy each other until the end.  I’m pretty sure I’ll continue to ask him questions of unrelated topics during his plotless action movies, and he’ll continue to play imaginary violin during the scenes I’ve dubbed as my Korean moment.

And we’ll still love each other, annoyments and all.

Photo by Joshua Chan, taken during our prewedding photo session where we were encouraged to annoy, ahem, tickle each other.